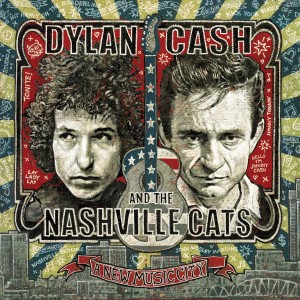 Nashville became a magnet for rockers when Elvis Presley, Buddy Holly, and Gene Vincent recorded there in the ’50s, but the ’60s British Invasion and folk-rock boom also connected to the Nashville recording scene. Peter & Gordon paved the way, recording a country album there for Capitol in December 1965.

This two-disc, 36-track anthology, created by Legacy Recordings with the Country Music Hall of Fame to accompany its exhibit on the subject, explores the way rockers and folk-rockers connected with Nashville in the late ’60s and early ’70s.

The material explores several areas. Two established Nashville stars are heard covering Dylan tunes: Johnny Cash and June Carter’s hit 1964 duet on “Don’t Think Twice It’s All Right” and Flatt and Scruggs’s take on “Down In The Flood.” Such folk-rockers became a bone of contention between Lester and Earl, leading to their 1969 split.

Dylan is heard on tracks from Blonde On Blonde and Nashville Skyline. Nashville artists trying more progressive directions included John Hartford, heard on his original ’68 RCA recording of “Gentle On My Mind.”

Also surveyed: the many folk and rock acts who recorded in Nashville, excluding Peter & Gordon but including Ringo Starr, Paul McCartney and Wings, and George Harrison. Two Byrds tracks from Sweetheart Of The Rodeo are included.

In all it’s a complex story, given a compelling overview.