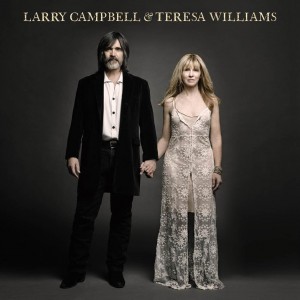 Multi-instrumentalist Larry Campbell is the consummate hired gun. He picked his licks as part of Bob Dylan’s eight-year-long Never Ending Tour, led the Levon Helm Band’s Midnight Rambles, and served as a sideman with Sheryl Crow, Paul Simon, and many more. Now, he’s stepping out front.

This isn’t exactly a solo project, as Campbell is joined by his wife, Teresa Williams. But as he wrote many of the songs and plays many of the instruments, it’s close.

Campbell first broke out as part of the New York City country music scene – and no, that’s not an oxymoron. Country – along with blues and other Americana roots music – informs this collection.

The album is a mixed bag. The songwriting is a tad bit clichéd at times, but Williams’ vocals and Campbell’s fretwork are truly inspired.

Williams’ singing could make Emmylou Harris green with envy. In fact, she sounds so much like Harris, you may do a double take. Gorgeous.

For his part, it should come as no surprise that Campbell can play. On the opener, “Surrender To Love,” his reverb-laden Memphis riffs are soulful, highlighted by a funkified, syncopated soul. For “Did You Ever Love Me At All” he brings sublime acoustic fingerpicking. And he adds mandolin, fiddle, and organ to other tracks.