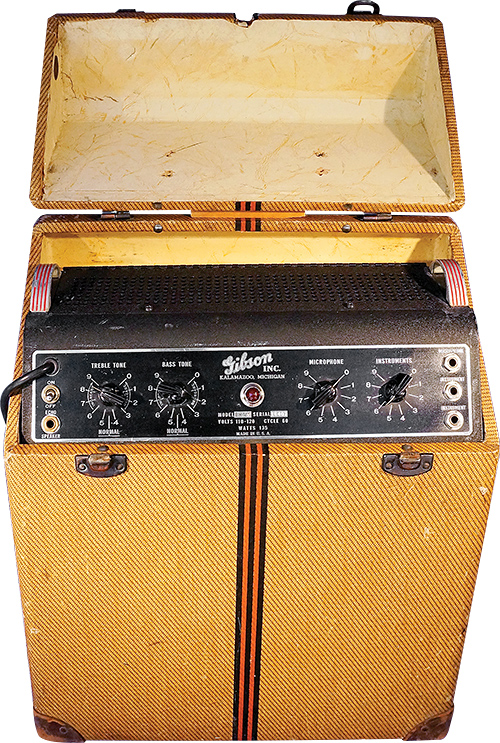 Guitarists playing anything other than big-band jazz or Western swing tend to approach pre-rock-and-roll tube amps with reservation. We’re often fascinated, and might enjoy a quick play just for interest’s sake, but we don’t expect to find much practical use from the sounds stored inside.

Even a quick blast through a good 1939-’40 Gibson EH-185 comes as a shocker, then; not only usable, but deep, rich, biting, and full of character, this amp is a world-class tone machine, and it works for just about anything short of the extremes of heavy rock and metal. Not that this is news to everyone.

Plenty of major artists have been hip for many years to the prowess of the early EH-185, and even Josh Homme of Queens Of The Stone Age has miked one live on occasion to produce his powerful grind. Hell, it even made Line 6’s modeling menu a couple years ago, and whatever you think of digital amp emulations, that tends to tell you that a vintage classic has arrived… or has already been there.

The EH-185 was Gibson’s top-of-the line amp during what we might call the first epoch of electrification. It partnered the EH-185 Hawaiian lap-steel guitar, but was also frequently the amp of choice alongside upper-tier, pre-war Electric Spanish guitars such as the ES-250 and ES-350. Charlie Christian played through an EH-185 after jumping up from his ES-150 to an ES-250, as photos of his live performances from the year or two before his death in 1942 indicate (the oblong upper grille of the amp clearly visible behind the guitarist and that beautiful blonde instrument). In addition to the classic lithe, lively, melodic Christian runs, live and studio recordings from the time exhibit a meaty yet clear tone, one with boatloads of body, all characteristics of the mighty EH-185. The greater surprise comes, though, when you crank one up a little higher than Charlie was generally allowed on the bandstand, and attack it with some resoundingly post-war chops, via a biting solidbody. This amp can sing extremely sweetly, with a tone that goes far beyond vintage blues and swing to sit well in the mix for indie, grunge, alt-rock, and so many other contemporary styles. How does it manage to be so much more than the woody, slightly woolly jazzbox that we find in so many ’30s and early ’40s amps? The reasons are multifarious.

First off, virtually nothing about the EH-185 is anything like any amp built post-WWII that you’re likely to have played. It has preamp tubes, output tubes, and a speaker, sure, but each of these and the ways in which they are connected are entirely different from the common “vintage” Fender/Vox/Marshall templates, and even from the major American amps of the late ’40s and early ’50s that often appear so archaic, but with which many guitarists will be at least glancingly familiar. It does have a pair of 6L6s in the output stage, which might seem familiar, but these are early iterations of that tube, and far less efficient (while far more Coke-bottleish) than 6L6s that came into production in the ’50s. In this circuit, feeding off plate voltages from the 5U4 rectifier tube that are well down in the sub-300-volt-DC range, these 6L6s deliver something in the region of 20 watts – but it isn’t all about the power, by any means. Ramping up into that are three stages of octal goodness from 6J7 preamp tubes, with a 6N7 in the phase inverter. The 6J7 is a pentode tube – or, more correctly stated in its day, a “triple-grid detector amplifier,” with one of those scary looking top connectors for the upper grid. It was commonly used as a radio receiver tube, but makes a gutsy and juicy preamp tube, too, and forms a big part of the EH-185’s sonic foundation.

While the natural first move would be to follow Gibson’s instructions and connect your guitar to one of the two Instrument inputs (as Charlie Christian likely did, given his relatively clean, full sound), any fan of early amplification will tell you to jack into that Microphone input to really let it scream. Doing so sends you via an extra 6J7 gain stage, followed by the Microphone channel’s Volume control before the signals merge into the second gain stage. In other words, it’s a lot hotter. The channels then blow through the third 6J7 together, which is tied to an odd convolution of a tone stack something like a cathode-follower, one which provided surprisingly versatile EQ for its day. You’ll hear reverential talk of the impressive Bass and Treble controls in Fender’s tweed Twin of the early ’50s, but this Gibson had ’em some 13 years before. The Treble control, like many, was a simple high-pass filter, but the Bass was an unusual thing running to ground via an inductor to beef up your signal as desired. Circa 1941, Gibson did away with the dual EQ for a more conventional single Tone control, changing to 6SQ7 triode preamp tubes around the same time. The EH-185 was discontinued after 1942, and didn’t return to the fold after the WWII stoppages.

Another unusual feature of the EH-185, and another that is too-often overlooked when gearhead talk turns to “first piggy back amp,” is the removable top that stores in a lid in the top of the speaker cab, and can be used remotely via several feet of umbilical cord. This connection carries not only the output signal, but also the voltages required to fire the business end of a 12″ field-coil speaker. Pushed, this driver exhibits plenty of throaty, reedy grind, but it also presents a surprising degree of fidelity when not overly strained. The amp chassis can also remain in its shelf in the top of the speaker cab for combo-style use, but when it’s removed, that oval upper grille serves as a bass port of sorts, slightly filling out the amp’s overall sound.

If you encounter a fixer-upper EH-185, it’s worth locating a skilled and experienced tech to return it as close to spec as possible. Plenty of old amps can be somewhat modded or “modernized” in the name of a cheap-and-easy means of making the things playable, but this Gibson classic is quite valuable – and extremely worthy – just as it was created by its maker. Odds are you’ll want it to stay that way.