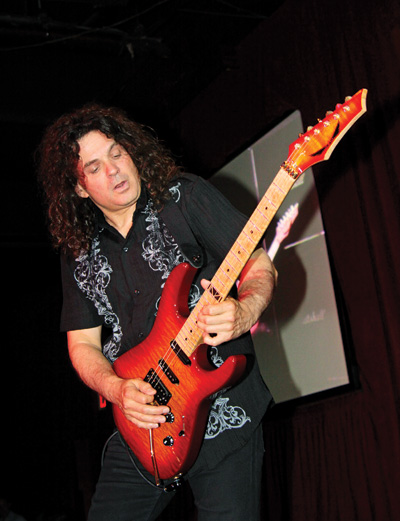 Vinnie Moore emerged in the mid ’80s, garnering praise for his work as a solo instrumentalist and for his contributions to Alice Cooper’s Hey Stoopid album and tours.

In 2003, Moore landed a gig with the British rock group UFO, joining vocalist Phil Mogg, drummer Andy Parker, keyboardist/rhythm guitarist Paul Raymond, and bassist Pete Way. While some still consider him “the new guy,” Moore has been a driving force in the band as a primary songwriter and his tasty melodic style makes him an excellent fit as lead guitarist.

“I’ve always been a melody guy,” Moore said, reflecting on his audition. “I focus on what’s right for the song, and that’s what they were looking for.”

VG sat with Moore to talk about the group’s latest release, Seven Deadly, lauded as one of its most powerful.

What was your setup to record?
I used a Marshall JCM 2000 DSL 100, which is my main amp, and a Peavey Classic head with EL84 tubes. Most of the stuff was played with a Dean Vinman signature guitar straight into the amps, no effects. I used the Peavey for the solo and rhythm on “Wonderland,” and pulled out my ’80 Marshall JMP Mark II 100-watt head and used it with a Tube Screamer for a couple solos. I tried the JMP first with my ’91 Les Paul in the song “Waving Good Bye,” using the neck pickup through the Tube Screamer and plugged into the old Marshall. I was going for a Mick Ralphs kind of sound, and I think I got close. I was really happy with the tone. I also used the Les Paul, Tube Screamer and JMP on “Steal Yourself.”

Another pedal I used quite a bit was the Analog Man Sun Face, which is like a Fuzz Face and it has a Germanium transistor. I used it for texture to double some rhythm parts. It has a big hairy fuzzy sound that I was mixing under the other rhythm tracks, and it just made it sound bigger and fuller. It’s really a cool effect.

I played three or four of my signature Dean guitars on 95 percent of the tracks. I used a Strat for the solo on “Year of the Gun” and a Dean acoustic with a few mics in front on songs like “Angel Station,” “Burn Your House Down,” and “Waving Good Bye.”

How did you get sustain in the intro of “Angel Station”?
That’s an E-Bow, which I’ve used so much on different things to create texture. I almost nixed that part from the song. It was on the demo, and Phil loved it so much he wanted to keep it. In fact, we made that part longer so it carries further into the beginning.

How many tracks do you usually record when building guitar parts for a song?
Usually, it’s a main rhythm, then I’ll double the rhythm, then add a solo. But, I used the Sun Face a couple of times under the main rhythm for texture, and sometimes I’d add clean or half-clean sounds. So it’s usually three, but sometimes a few more.

Which are your favorite tracks or solos?
I like some of things I did in “Steal Yourself” and “Burn Your House Down.”

Had you tried any different techniques or gear while making this album?
I played quite a bit of slide; I love the sound and I love playing slide. I prefer glass, and wear it on my third finger.

Was there anything you might have done differently?
I’ve never done a record where I didn’t have a criticism. I might have had the rhythm guitars a hair louder, but even if I had mixed the record, I’d have criticisms. I get too picky, though I’ve learned to let things go. Otherwise, I’d sit for weeks trying to make everything perfect.

When can we expect your next solo album?
I’m still in the “thinking about it” stage. I’ve built up a collection of vocal tunes that aren’t for UFO. At the same time, I have old instrumental tunes I didn’t put on earlier records. They’re good, but in a different style. I’d like to release them, as well. I need to get busy on that stuff, because I’ve been talking about it for too long!