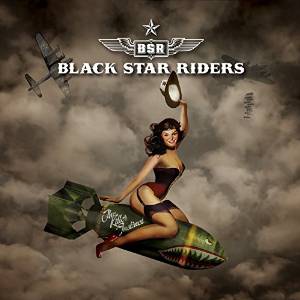 A few years ago, a rejuvenated lineup of Thin Lizzy hit the road, earning great acclaim thanks to longtime Lizzy guitarist Scott Gorham, singer Ricky Warwick (The Almighty), and later, co-riffer Damon Johnson (Brother Cane). When it came to recording a studio album on their own, they renamed themselves Black Star Riders and now offer up their second album. It’s a cooker.

The blistering opener, “The Killer Instinct,” is right in the Thin Lizzy pocket with guitar harmonies, off-beat chord hits, and a Phil Lynott-styled delivery from Warwick (who also adds acoustic guitar here and there).

Gorham takes the guitar lead in his trademark melodic style and you’ll be pumping your fist in no time. “Finest Hour” is a radio-ready rocker with Johnson’s hot fret work, while “Bullet Blues” is a stomper reminiscent of the ’76 track “Rocky.” “Soldierstown” brings the classic “Emerald” to mind, but it’s all in good spirit and, surely, Black Star Riders wears its Lizzy heritage proudly.

Considering that the original band’s last album was released in ’83, you have to commend BSR for keeping alive the spirit of this Irish institution. Mr. Lynott would be proud.