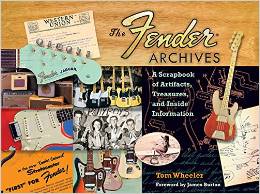 No, this is not quite an entrée into the Vatican’s secret library, the hush-hush files of the KGB, or the locked vaults of the Pentagon. But for vintage guitar and amp fans, it’s about as good.

This licensed giftbook is part history, part scrapbook, all treasure trove. Ace guitar scholar Tom Wheeler digs deep into the archaeology of Fender, gaining access as no one else before him. The hardbound book features just 104 pages, but its chock full of pull-out reproduced Fender brochures, inter-office memos, Leo’s own drawing-board sketches, personal logbooks, handwritten letters, and more.

Wheeler of course needs no introduction. Most VG readers probably even remember the place and moment when they first ran across his groundbreaking 1982 history American Guitars: An Illustrated History and haven’t been the same since. He’s the most respected and trusted ax scribe out there.

As such, he’s able to open doors and call on old friends to assemble such a project. Along with delving into Fender’s archives, he gained access to sales chief Don Randall’s family archives, noted Fender historian Richard Smith’s collections, the photo galleries of John Peden and David Brass’ Fretted Americana, and the files of Fender fanatics Bob Perine and Ned Jacoby.

Fear not: This isn’t a musty scholarly tome for academics. This is truly a book for guitarists and amp aficionados. Yes, the format with the pull-out items is rather gimmicky. But it’s also cool and different, at least in the guitar world.

Ben Harper and the Innocent Criminals