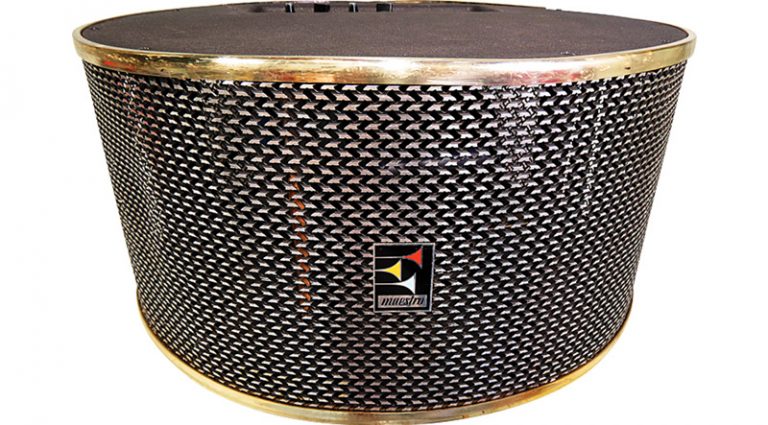 To record “Little Wing,” Jimi Hendrix plugged his Stratocaster into his usual amplifier, then did the unthinkable; he ran guitar signal into an organ speaker – a Leslie rotating-speaker cabinet. Inventor Donald Leslie had designed the unit for Hammond organs, offering a swirling, otherworldy sound ideal for church services, scary or watery sonic effects for movie theaters, and the like. Now, Hendrix took it to a new dimension.

In “Little Wing” on 1967’s Axis: Bold as Love, he used the Leslie to sculpt sounds ranging from warbly to spacey to downright rocking. As Jimi succinctly described the result, “It sounds like jelly bread.”

The quest to control, contain, bend, and otherwise wildly distort a guitar’s sound had, up to that time, typically been done with electrics. With the rotating speaker, it became physical.

In 1965, CBS purchased both Leslie and Fender; the latter took the corporate ownership opportunity and Hendrix’s cue to launch its Vibratone in ’67, which was a Leslie set up for guitar work. Others would soon follow the leader. The hands-down funkiest of them all was Gibson’s entry – the Maestro Rover R0-1. Whereas the Leslie’s rotating speaker was housed in a staid wooden cabinet, the Rover looked every bit its part. In fact, it went beyond. In the days of the Space Race, you could easily mistake it for a UFO that had come to land atop your backline and spread Martian mayhem.

To launch its spaceship, Maestro cut a demo in 1972. A narrator tries to talk hip as he explains the Rover’s features with all the style of a lab-coated high-school science-film narrator:
“Most everyone is familiar with the way out effects an organist can get with a rotary speaker. Until now, the guitarist and other musicians could only dream of achieving those phasing sounds. But now, thanks to the Maestro Rover, these musicians can attain these effects – and then some! This was accomplished through the magic combination of a specially designed speaker that actually spins, a unique built-in amplifier, and a variable-speed rotary speaker.

“Where would you be without Rover?”

Cue the dull, flat sound of picked guitar notes and a flat chord.

“Or with the Rover!”

The workings were Science 101. Everyone remembers the class on the Doppler Effect, invariably explained by your musty old physics teacher by the approach and passing of a train where the frequency of a sound wave changes for an observer relative to its source. The Maestro Rover, then, was Mad Science 101; harness the Doppler Effect in a stationary speaker.

The Rover recreated that Doppler Effect with a 6″/35-watt speaker inside a plastic enclosure that spun within the corrugated drum.

But where Leslies were just a speaker and thus needed an outboard amp to boost signal, the Rover had a built-in amp! And while Leslies had just two speeds, the Rover was variable from zero to 20 revolutions per second, controlled by knobs for Volume, Speed, Slow, and Fast. As a 1973 Maestro magazine ad proclaimed, “The Rover runs circles around other rotating speakers. You don’t have to settle for just two speeds. You can spin your sound at any speed. You can even pre-set the specific speed you want. Then just floor the footpedal when you want it. And the Rover doesn’t limit the spinning sound just to the organ. Its new ‘rounder’ sound makes almost any instrument sound great… organ, guitar, horns… even vocals. The Rover is louder and clearer because of its own powerful built-in amplifier. And for large concert hall sounds you can connect several Rovers together… and control them with just one pedal.”

Maestro also promoted the Rover’s small size and lightweight, selling points in the space race against the Leslie or Vibratone. The Rover measured just 19″ in diameter and stood 9″ high, not including its adjustable stand. And it weighed less than 20 pounds, compared to the shoulder-straining, back-breaking Vibratone.

But overall, it was the Rover’s sounds that were the big draw. The demonstrator promised, “The blues or rock musician will appreciate Rover’s spacey and rotary controlled feedback sounds. Without a doubt, Maestro Rover will enter the hall of fame of heavy instrumental sounds!”

One musician who appreciated the Rover was David Gilmour. Since the early days of Pink Floyd, Gilmour used a Leslie 147 on “The Narrow Way” from 1969’s Ummagumma. For 1973’s Dark Side of the Moon, it’s variously reported that he used either a Maestro, Leslie 900, a Univox Uni-Vibe pedal – or perhaps all three. He then adopted Yamaha’s RA-200 rotating speaker, combined with his Hiwatt amps, for Animals in 1977 and The Wall in 1979, specifically on the solo in “Comfortably Numb.”

During sessions for 1994’s The Division Bell, Gilmour used the Maestro Rover. When the Floyd toured the album, he toted along three sets of custom rotating-speaker cabinets called Doppolas, built from Maestro Rovers by his techs, Phil Taylor and Paul Leader, and using a pair of similar rotating 6″ speakers with concert-worthy 100-watt drivers. Gilmour ran them in tandem with his stationary 4×12 speaker cabs.

On songs such as the instrumental “Marooned,” Gilmour’s prolific use of the vibrato, bent notes, and the whirling Rover combine to create an ethereal mood with echoes and waves of sound playing against each other.

It’s probably fair to say this was a far cry from what Donald Leslie ever had in mind!