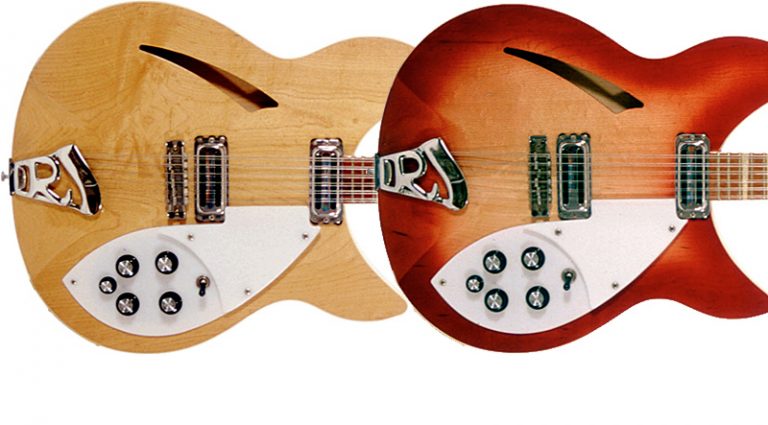 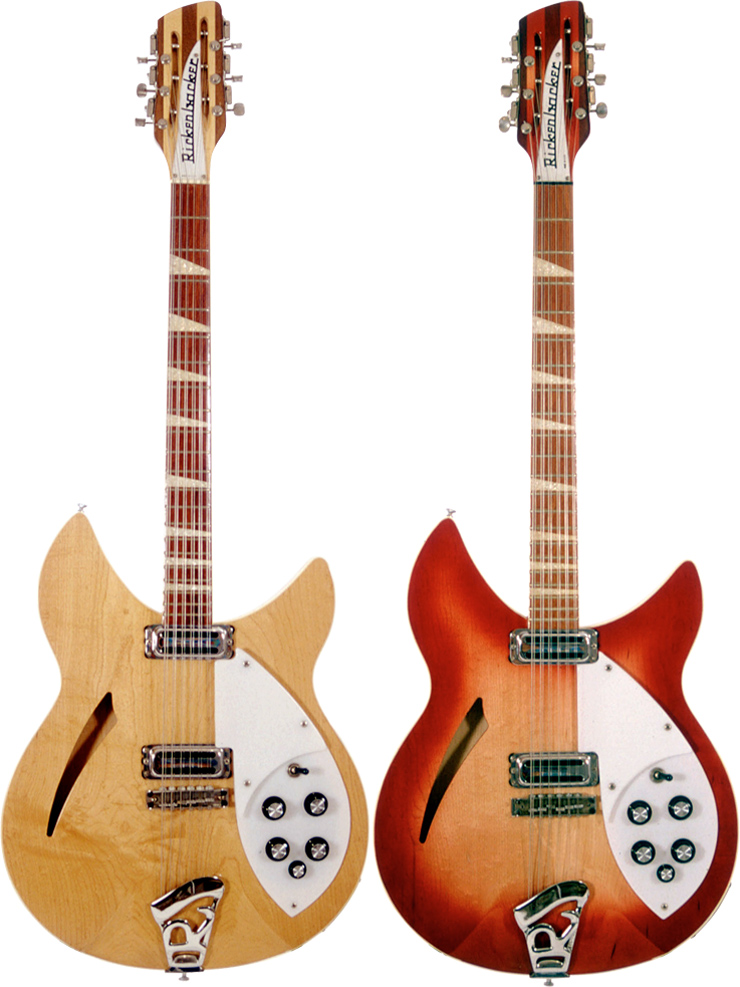 George Beauchamp and Adolph Rickenbacher founded Electro String in 1931 to manufacture what everyone would soon call “Rickenbacker” guitars. Success with musicians came early. Rick steels were the measure of quality and performance; their tone established the standards. On the other hand, the company’s fully electric bass viols and violins excited segments of the industry, but never sold well. Same story for the novel-but-offbeat Bakelite standard guitars: few players bought them. While it’s true Rickenbacker set the stage for modern electric guitars, after World War II the company languished as others, like Fender, capitalized on them.

F.C. Hall, who was a partner with Fender Sales, knew the market well. When he bought Electro String in 1953, he immediately started remaking it (and soon everyone would call the company “Rickenbacker”). Adolph Rickenbacher had come to guitars with a background in industrial arts. He liked to work with cast aluminum, Bakelite, and stamped metal, which led to many of the company’s early innovations, but also limited its designs. Hall moved the factory toward finely crafted wood, the more traditional guitar material for good reason: it worked better.

The solidbody Combo guitars and 4000 basses followed, but had only limited success. The latter’s neck-through-body would prove to be the other way to make solidbody basses (compared with Fender’s). Though the idea would later sell thousands of Ricks and influence numerous high-end builders, nobody knew that in 1957.

Rickenbacker’s final break with the ’30s (and longest step toward finding a new niche) came when Paul Barth (one of Beauchamp’s friends and employees) left the company and Hall hired master builder Roger Rossmeisl. A German handy with a French curve, he quickly revamped the solidbody line and created the new acoustic/electric Capri Series. In visual terms, Rossmeisl’s guitars were among the most appealing electrics ever produced.

By ’58 Rickenbacker produced both Deluxe and Standard double-cutaway acoustic/electric models.  The Deluxe 360 and 370 models had triangle-shaped fingerboard inlays, bound necks, and bound bodies. Moreover, they came with a Rick-O-Sound jack after mid 1960 (hooked up with a special junction box, it divided the signal from the guitar’s different pickups to produce a quasi-stereo effect with two amplifiers.) Standard models, the 330 and 340 Series, had dot inlays and no bindings.  The 3/4 sized 310, 315, 320, and 325 models had Standard features as well. Rickenbacker designated vibrato with a 5 as the last digit in the model number, e.g., 325, 335, and 365.

Now let’s talk about the 12-string models. By ’63, Hall must have been frustrated. All these beautiful six-strings, and still no blockbuster. The 360 and 365 sold well, but not like Gibsons. Fender and Gibson had the solidbody market locked tight. While Danelectro and Gibson did turn out earlier 12-strings, Hall still sensed an untapped market. A Rickenbacker had potential if designed correctly and played by musicians looking for a new sound. Since Rossmeisl had moved to Fender, Ward Deaton developed ideas at the factory, including what would become Rick’s highly regarded headstock design. Here, crowded with just enough room to turn easily, 12 closed-back Klusons snuggled, just waiting to make music history again for Rickenbacker.
Three 12-string prototypes were made in ’63; two 360/12s and one 625/12 (a solidbody).  An inventory sheet mentioned a backordered 360F/12 (which would have had a single cutaway), but there is no evidence the factory made it. The company displayed the first 360/12 at the ’63 summer trade shows. It had gold-backed Lucite pickguards, TV-style control knobs, and a double-bound Fireglo body. The flat tailpiece resembled those used on other non-vibrato Capri models.  Triangle fingerboard inlays and a non-bound slash-shaped soundhole rounded out the design.  Like all of the 360 Deluxe models made after June 1960, the 12-string versions normally had Rick-O-Sound stereo. The first prototype soon went to Suzi Arden, a country/western lounge singer who worked in Las Vegas.

The second 360/12 also sported a double-bound body with a Fireglo finish, a slash sound hole, triangle inlays, and a flat tailpiece.  But while Arden’s guitar had conventional stringing, by the end of ’63, Hall had devised a novel way to make his 12-string play easier and sound even more distinctive; he intentionally reversed the traditional string setup.  The 12th string became the low E and the 11th string became the octave, etc. Strumming down, the lower-pitch string was hit before its octave counterpart. Since the second prototype was the first with trademark stringing, Hall always called it the first Rickenbacker 12-string. Besides using the reverse stringing, the factory substituted double-white pickguards and black control knobs for the earlier style Lucite guards and TV knobs. This guitar went to George Harrison in February ’64.

Rounding out the saga of ’63 prototypes, the first 625/12 traveled to a few trade shows (but no further) during this decade. Rickenbacker would produce a more economical solidbody 450/12 instead. Mike Campbell of Tom Petty and the Heartbreakers bought the original 625/12, used, for $125 in the ’70s, when reading the classifieds paid off. At the time, he had no idea what he’d found. Petty held the guitar on the cover of Damn the Torpedoes, which sparked a 12-string revival of sorts and pushed the 625/12 into production.

But back in the ’60s, while the first 625/12 was still lost in limbo, Harrison made good use of the 360/12. “You Can’t Do That,” “A Hard Day’s Night,” and “Eight Days a Week” come to mind. Certainly, no one at Rickenbacker worried about the next big thing for awhile. Because of increased demand, the factory, now situated away from Los Angeles in Santa Ana, could barely keep up. The 12-strings became production items, though the features remained in flux through the summer. The 360/12 displayed at the ’64 NAMM show had white guards, a double-bound body, triangle inlays, and an F-shape soundhole. Its flat tailpiece and controls were the same as George’s earlier model, but the show guitar had chrome-top knobs. Then came a new body.
A new body design for Models 360 to 375 hit the drawing boards in ’63. The factory shipped the first known example, a Model 365, on June 1, 1964. The new form featured rounded edges on the face.  Hall described the look in a press release to trade papers, saying, “The smooth roundness avoids all that is harsh and yields flowing lines for smooth, easy playing.”  The new design did not allow for binding on the top front edge of the guitar. On the other hand, bound sound holes became standard.  The guitarmakers kept all other Deluxe features on the new-style 360 guitars.

The production model 360/12 made after the summer of ’64 had the new body style, which used a cast, chrome-plated R tailpiece.  The lack of this single part delayed 12-string production for several weeks, if not a couple of months. Roger (then Jim) McGuinn, after seeing the Beatles in A Hard Day’s Night, bought one of the first off the rack (he later had the factory add a middle pickup and special wiring – three-pickup models were in the 370 Series). Meanwhile, Rickenbacker struck a deal to produce an export line for England’s Rose, Morris Ltd.

The export line, with its own numbering scheme and unique features, quickly caught on with British Invasion groups. Pete Townshend perfected his guitar-smashing skills with the 12-string Model 1993.  It sported a double-bound body, an F-shaped sound hole, and dot inlays.  The factory equipped it with a flat tailpiece and a mixer control.

After the introduction of the new-style 360/12 and the Rose, Morris 1993, the factory still made a number of the old-style double-bound 12-strings for the domestic market.  This included a few guitars identical to the Rose, Morris (the American model number for this guitar became 330S/12). On the double-bound 360/12 models the factory added the suffix O.S. (old style). Later this changed to w/WBBS (with White Binding Both Sides) and then just WB, as in 360/12WB.

The standard finishes for Rick 12-strings were Fireglo and Mapleglo (natural maple), both used since Rossmeisl’s reign. Factory invoices described a new “lighter shade of Fireglo” in late ’64.  The other colors listed as standard for all Rickenbacker guitars in ’68 were Azureglo, Jetglo, and Burgandyglo.  Though not listed, additional finishes from this period included orange, shaded blue, shaded green, walnut, and cherry red. The factory painted custom-ordered colors, but at an extra cost. Satin finishes were available too, but only after the early ’70s.

Today, it has been nearly four decades since Rickenbacker’s crystalline 12-string overtones first filled the airwaves. Old yet new, these guitars have become an essential part of post-modern guitar playing in which the best sounds of different decades combine to create the sounds of today. Ricks, especially the 12-strings, still play a key role in defining tone and design in a way George Beauchamp and Adolph Rickenbacher never could have imagined back in ’31. Those pioneers set the stage for modern electric guitars. F.C. Hall stood on their shoulders and put more than a few Rickenbackers on it.

This article originally appeared in VG February 2001 issue. All copyrights are by the author and Vintage Guitar magazine. Unauthorized replication or use is strictly prohibited.