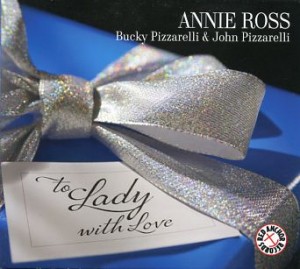 Although she has released 20 solo albums, Ross is best known for her tenure in the vocal trio of Lambert, Hendricks & Ross, from ’57 to ’62. But she’s also been a nightclub owner, songwriter, actress, and the subject of a documentary and a Broadway play. She was also a pioneer of jazz vocalese – taking an instrumental solo and putting words to it, most famously on saxophonist Wardell Gray’s “Twisted.”

“Lady” is, of course, Billie Holiday, and in the bonus DVD Ross relates how she became friends with her idol. Like Holiday and the best female jazz singers (Ella Fitzgerald, Anita O’Day), Ross is a musician who happens to use her voice instead of an instrument.

The DVD also features interviews with Bucky Pizzarelli and his son, John, her sole accompanists, both playing seven-string guitars, on 11 ballads. Unfortunately, cameras weren’t rolling when they cut the album, sitting in a circle in one five-hour session.

Bucky and John seamlessly alternate rhythm and lead duties, with the elder statesman supplying a heartfelt solo on “For All We Know,” and his famed son stepping forward on the bouncy “Travelin’ Light.” The tasteful fills by both never get in the singer’s way.

Thankfully, Ross doesn’t imitate Holiday. Her instrument may not be as facile as it once was but, at 83, possesses a depth of emotion that makes this tribute very special.