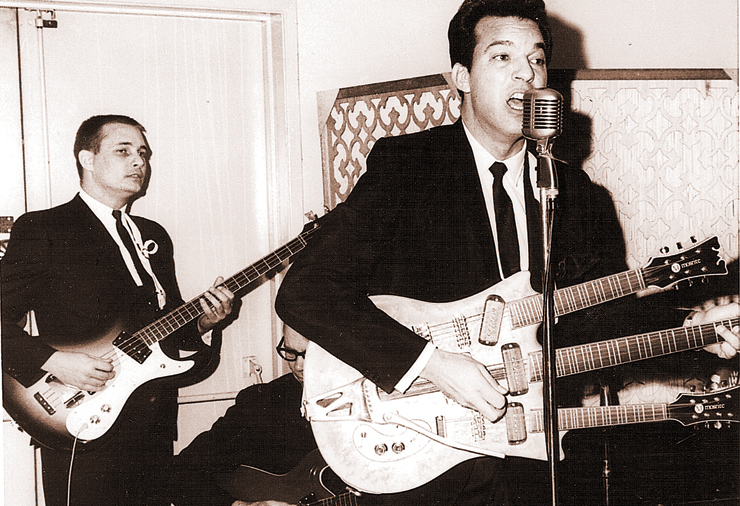 While not well-known in California guitar lore, Ed Sanner’s electronics designs have been heard by millions of guitar fans, and he has recently returned to building unique stomp boxes.

Sanner didn’t take up guitar until the age of 18, but his interest in electronics began earlier.

“I used to tinker with electrical things as a boy,” he said. “At 14, I was fixing televisions. When I got my first electric guitar, my amplifier didn’t work, so I set out to fix it. Soon after, I was messing with tape-echo circuits.”

Sanner played in country-music bands and worked at a transformer-/coil-winding company, served in the Air Force, then was hired at the Mosrite guitar company in 1965. “They had acquired Dobro about that time, and I was put in the Dobro department until the electronics section was set up. I ran the pickup department, as well.”

Though Mosrite was striving to market amps with its instruments, Sanner was asked to devise a fuzz tone. “I came up with the circuit named Fuzzrite,” he said. “Mosrite amps came afterward. If you find a Mosrite amp with ‘Mosrite Electronics’ on the front, it’s my design. I didn’t work on the tube amps, that was Howard Dumble.”

Mostly unfamiliar with distortion devices of the day, a friend who played steel guitar suggested he develop a fuzz with better sustain.

Initial response in the Fuzzrite was sluggish, but… “Davie Allan used them on some recordings, and became famous for using my fuzz. A lot of them were given to artists. [Mosrite vice-president] Andy Moseley would run to the Whisky a Go Go on the Sunset Strip and give them to guitarists.”

The breakthrough happened when the Fuzzrite was heard on Iron Butterfly’s In-A-Gadda-Da-Vida, and later, “I heard Jimi Hendrix used one on the Cry Of Love and Rainbow Bridge LPs.” Even Vanilla Fudge bassist Tim Bogert used one.

Sanner left Mosrite in the late ’60s to start a company called Rosac, which built early Melobar guitars as well as amps, PA systems, and effects. “My first project was the Nu-Fuzz, which had a Tone control the Fuzzrite did not have, which dialed in deep lows.”

Sanner left Rosac to start his own amp company, building one at a time (as he does occasionally still today). In 2002, he was asked to build a reissue of his Fuzzrite design, under his own name, and 200 units were produced.

More recently, Sanner has teamed with Hallmark to build reissues of his Nu-Fuzz pedal, which he does in his California shop, using new-old-stock Rosac knobs and stainless-steel chassis. “I sign each and they’re hand-painted by my son, Rick.”

Sanner still plays out, handling bass in a dance band, and he is gratified by the still-strong interest in his designs.