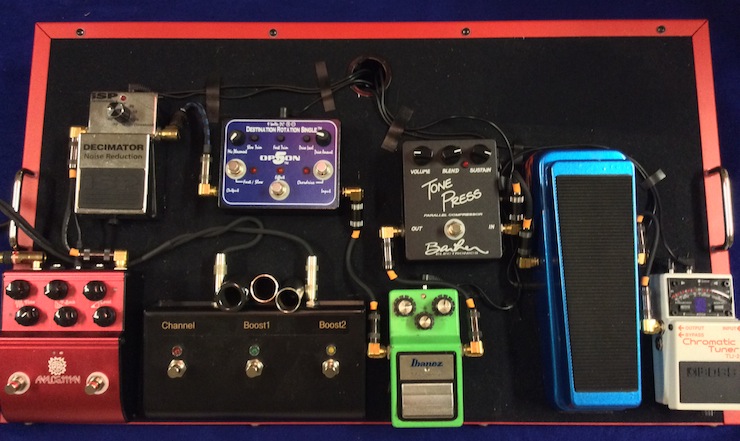 Guitarist/singer/songwriter (and VG contributor) Tom Guerra recently released his first solo album, All of the Above, which reviewer Pete Prown says is “hook-laden rock and roll originals that pay homage to everyone from the Beatles to the Byrds, and from Led Zeppelin to Mott the Hoople.” Tom is a fan of vintage gear, too, and has an impressive handful of guitars (watch for an upcoming feature on one of his Strats). Signal Chain, of course, focuses on stompboxes, so we asked him to give us an exclusive rundown of those he uses.

“My guitar goes from a Boss TU-2 tuner directly into an RMC Joe Walsh Signature wah. After using the same Vox Thomas wah from the ’70s, I retired it and found I liked the sound of the RMC. From there, the signal goes into a Barber Tone Press compressor, mostly for slide stuff,” he said. “After the compressor, it goes a 1982 Ibanez TS-9 modded by Analogman to round out the sound for leads. From there, signal goes into an Option 5 Destination Rotation, which is a Leslie simulator. I’ve always used real Leslies to record, but who wants to lug one to a gig for a couple parts? Next, it goes to a Decimator for noise reduction I use if a club has bad/noisy AC power, and it exits through the Analogman ARDX 20 dual-analog delay, set for slap back in one channel and space echo in the other.”

This article is from VG Signal Chain issue #002. All copyrights are by Vintage Guitar magazine. Unauthorized replication or use is strictly prohibited.