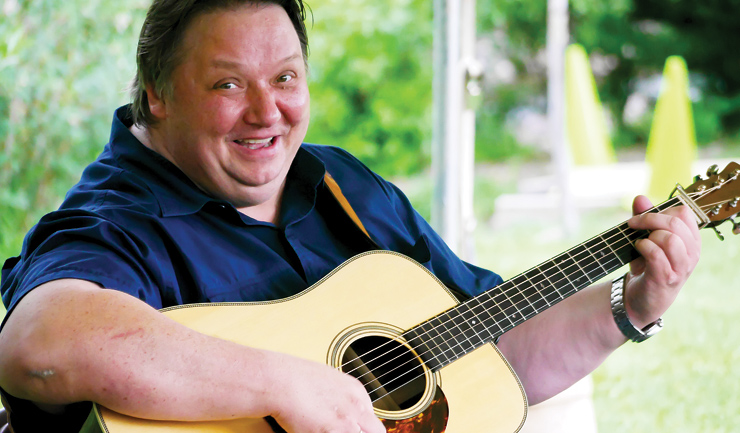 Uwe Kruger’s professional musical career began at age 15, when he and his brother, Jens, left their small town home in Switzerland to busk in the cities of Europe. Quickly, the Kruger Brothers developed enough following to host a radio show on public broadcasting. In 1995, bassist Joel Landsberg joined them to form a trio.

The Krugers’ music, while influenced by bluegrass, early country, and string-band music, has a unique character. Their songs aren’t simple verse/chorus/verse compositions, but rather longer forms that lend themselves to improvisation and dynamic variations.

Uwe got his first guitar when he was seven – a small-bodied folk guitar with steel strings that belonged to his father. When he was 10, his mother bought him an inexpensive flat-top. “I slept with that guitar,” he said.

At an early age, he became fascinated with American culture. “I got the Pete Seeger book America’s Favorite Ballads and a dictionary. My father told me, ‘If you’re going to sing these songs, you need to know what you are singing about.’’’

The Kruger Brothers’ first paying gig was in a department store. “I was 13 years old. We made $80, and from then on we were pretty self-sufficient. We had our first band and basically, it was the end of our family – our mother passed away and dad wasn’t taking it too well. I left home to be a butcher; I made $80 a month being an apprentice, but I made $300 a weekend playing music. I was a rich butcher.” By 15, he and his brother left home to be street musicians.

Kruger has owned and played many guitars during his career. “My first good guitar was a ’79 Martin D-28. It didn’t amplify well. I replaced it with a Yamaha FG-375 with a pickup. It sounded wonderful; I retired it in ’95 and got a Martin D-41. I also played a Santa Cruz Tony Rice model and a Martin OM-38.

Currently, Kruger is playing a Collings D-2H and a Wayne Henderson D-style. “The Henderson is the closest thing to an old Martin that I’ve ever owned. It was a luxury, but I feel like it’s mine.”