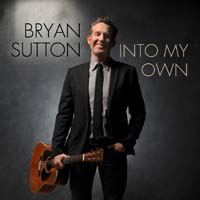 Bryan Sutton’s roots-music pedigree is ﬂawless. His award-winning work as an accompanist and soloist spans bluegrass, Americana, and contemporary country, all proof of his versatility and virtuosity. A gifted guitar educator, he earned two Grammys as part of Ricky Skaggs’s Kentucky Thunder, another for “Whiskey Before Breakfast” with Doc Watson.

His skills are front and center with Into My Own as he focuses on the traditional with “Cumberland Reel” and “Cricket On The Hearth” and teams with an ampliﬁed Bill Frisell, who he’s performed with in the past, for the offbeat “Frisell’s Rag.” Throughout, Sutton’s technical skills are perfection, every note where it should be.

And that presents a problem. Accompanied by Sam Bush, Ronnie McCoury, Stuart Duncan, and other greats, his ﬂawless execution comes off a bit too perfect, lacking the passion that characterizes great instrumental work. “Run Away” and “Log Jam” are among the many examples. Even his homage to Doc, “Watson’s Blues,” is heavier on clinical excellence than fervor, which was never the case with Doc or Clarence White.

Make no mistake: on the surface, Sutton gets the job done. Nonetheless, more from the heart and less from the head would have made a huge and obvious difference.

Derek and the Dominos