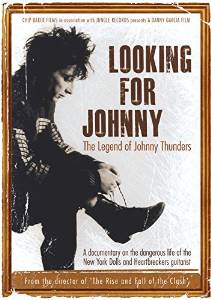 Often dismissed by cognoscenti as a morbidly nihilistic knuckle dragger, John Gazale, Jr. – a.k.a. Johnny Thunders – tends to be remembered more for the trampled track of junky business he left in his wake than for his catalog or impact. In addition to founding roles in the New York Dolls and the spinoff Heartbreakers, Thunders and his battered TV Yellow Les Paul Junior influenced bands as varied as the Replacements and Guns ’N Roses.

While Garcia gives much time over to recounting the by-now tired tale of the Dolls, he spends perhaps too little on certain aspects of Thunders’ overlooked and sometimes prolific solo career, which included his arguable masterpiece, So Alone (featuring Phil Lynott and a trio of Steves – Marriott, Jones, and Lillywhite – among others) and Gang War with former MC5 guitarman Wayne Kramer.

Ultimately, though, Garcia saves the project by bird-dogging rare archival footage spanning Thunders’ career from the Dolls days right through to his (some say mysterious) death in 1991.