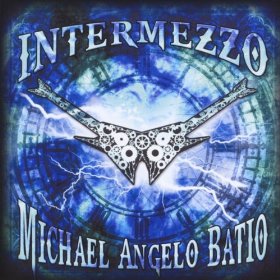 MAB ignores the critics and pushes his art forward with prodigious talent and inspired business savvy. He borrows here from the model used on Santana’s hit album Supernatural to bring together some of the best-known guitarists in shred and metal.

Intermezzo is a sprawling note-intensive rollercoaster ride with some of Batio’s ﬁnest compositions to date. It features MAB along with George Lynch, Craig Goldy, Guthrie Govan, Michael Romeo, and Chris Poland.

“Pillars Of Steel” is a grand instrumental track in the Steve Vai mode with blistering contributions by Lynch, Goldy, Dave Reffett, Jeff Loomis, Rusty Cooley, and Andrea Martongelli. It’s a back-to-back shred fest, and Batio is in ﬁrst-rate company.

Despite MAB’s over-the-top reputation, this is a varied album with melodic ballads, neo-classical, jazz, and prog-metal. With the contributions of established as well as new-school shredders, Intermezzo is a strong record with nimble-ﬁngered excellence.