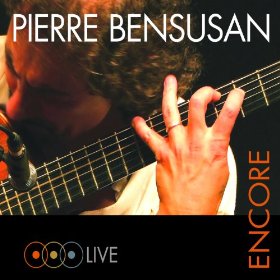 In a career spanning four decades, acoustic virtuoso Pierre Bensusan has created some of the most enchanting guitar music ever heard, much of it in his beloved DADGAD tuning. Oddly enough, even with near-continuous touring, he’s still a cult commodity. Encore, his three-CD set of live recordings from the mid ’70s to today, may cure that.

On Encore, you can hear this style in “Happy Feeling” and “Demain, dès l’Aube,” both fine live examples of his otherworldy approach. Listen for the soaring melodies and arpeggios, bent strings, rippling harmonics, changeable time signatures, tapping, and moving basslines – sometimes all at once. It often sounds at times like two – maybe three – guitarists. But it’s all Bensusan laying it down live.

That style is the just the tip of the iceberg. In the mid ’70s, Bensusan played straight-up bluegrass mandolin with banjoist Bill Keith and, in fact, was a smokin’ eight-stringer. The Frenchman has a deep affinity for Irish music and shows it here in his wonderful “Celtic Medley.”

Also included is one of his best-loved songs, the instrumental “Wu Wei.” It may have an Asian title, but his guitar work here is genresmashing, as he mixes world folk with pop hooks, classical structure, and jazz chord changes in uncanny fashion. If a guitar could make you feel like flying, this gem might be the one to do it.

Whether you like acoustic/DADGAD and other fingerstyle virtuosos, or are a music-culture traveler by nature, this is a must-grab release. More broadly, it’s long past time for Bensusan to be acknowledged as one of the acoustic giants of our era.