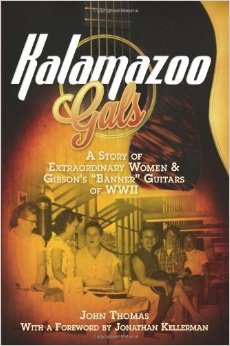 Intrigued by that “Only A Gibson Is Good Enough” decal on the headstock of his World War II-era Gibson Southern Jumbo, musician and writer John Thomas began delving into the story behind the famed Banner guitars. What he discovered is part thrilling mystery, part pure Americana history.

The legend long upheld by Gibson’s own historians is that the war yanked the Kalamazoo factory’s workers away to ﬁght, leaving only master craftsmen behind to build some of the best-sounding Gibson ﬂattops of all time. The truth, Thomas discovered, is that Gibson hired a stand-in female workforce and taught them to be replacement “Rosie the Luthiers,” laboring alongside a tiny remaining prewar workforce. It was these women – newly trained but detail-focused – that were largely responsible for the great Banner guitars.

Thomas tracks down and interviews many of the surviving “Kalamazoo gals,” offering insight into the crafting of the guitars as well as the working of Gibson at the time. He examines the material shortages and limits put on Gibson’s production by the federal government and how that likely played into the factory’s “cover-up” of the women workers as well as the small number of Banner guitars built.

Thomas also dives deep into the Banner guitars themselves, x-raying the bracing and neck joins, making sense of parts and detail changes, wood choices, and build vintages. If you’re a Banner fan, you’ll want this book.

The Replacements – Tim, All Shook Down, Pleased to Meet Me