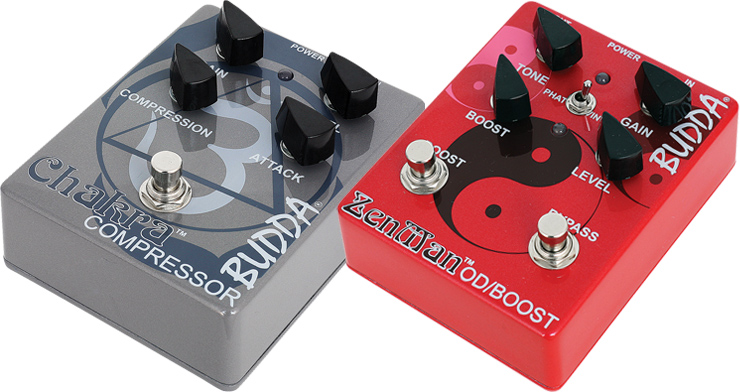 Best known in guitar circles as an admired amp builder, Budda has released a pile of new stompboxes that cover all bases from modulation and delay to the crunchy stuff. Two of these offerings are the ZenMan overdrive/boost and the Chakra compressor, straightforward-looking boxes with some unique features waiting inside.

The ZenMan is one of those unique boxes meant to complement a good amp, rather than smother it in distortion. The pedal’s layout is simple: Tone, Boost, Gain, and Level, along with a heavy-duty Boost footswitch and a Bypass switch. In this case, the latter is another name for “overdrive on/off,” as it activates the pedal; in this mode, the ZenMan’s desired settings are dialed in. The Tone knob is pleasantly nuanced – not shrill or harsh, as is the case with some pedals. The Vintage/Phat switch is another cool feature, providing some beef in Phat mode while easing off the middle for a more natural, old-school sound in Vintage mode. As if that’s not enough, the ZenMan’s gain can be dialed down and the Boost used as a clean-booster for solos.

Jamming on a ’63 Fender Jaguar through a classic 1×12 tube combo, the ZenMan performed superbly, allowing the Jag’s natural voice to shine through. To play the blues all night long with just a bit of tube-amp bite, set the ZenMan for light gain. Turn up the gain to reach into Keith Richards territory and keep going for some deep Bad Company riffery. Turning the mini switch to Phat gives a more contemporary sound with some nice low-end chunks. In fact, the ZenMan delivers impressive bottom in this mode – suddenly the 1×12 cabinet had the beef of a 2×12 and, at times, even a half-stack. Add in the Boost feature and the sky’s the limit, with the clean booster settings providing killer country or blues workouts without the dirt. Step on the Bypass switch and you’re back to your amp’s unfiltered tone. Used as a go-to box for soloing, the ZenMan could be quite deadly with the amp set for a decent overdrive sound and the pedal set up as a solo boost – it’s easy to imagine tone going through the roof. Cool pedal, indeed.

Like the ZenMan, the Chakra is a straightforward-looking Budda box with a few nice surprises. Designed to mimic optical studio compressors from the 1960s, the Chakra has four knobs – Gain, Level, Compression, and Attack – as well as a heavy-duty footswitch like the ZenMan. The Chakra is capable of light, transparent compression, as well as a heavy “squeeze” sound. The more the Gain is pumped up, the more the Compression and Attack knobs react to the signal.

While many guitarists are confused by compressors, there are a few standard ways to employ them. With most of the Chakra’s controls set around 12 o’clock, the compressor can be used as an overall fattener and sustainer, giving a guitar a bigger dimension and a more professional sheen, as well as controlling dynamic volume spikes and drops. With the Compression control cranked up, the Chakra delivers that “plucky” squeezed tone that has been heard on a thousand Telecasters in a thousand country songs. Compressors are also terrific for acoustic guitars and archtops, especially when used at light settings to add dimension and sound control. And for louder rock players, the Chakra will work as a booster/sustainer for solos and, once again, as a dymanic leveler that gives a more professional sound.

Used in combination, the ZenMan and Chakra were impressive, giving that “pro” tone at everything from clean to gritty to big and crunchy. Better yet, both pedals feature true bypass, stylish chickenhead knobs, 9-volt or DC power, and a rugged steel chassis that will survive just about any gig. Give ’em a stomp and see what you think.