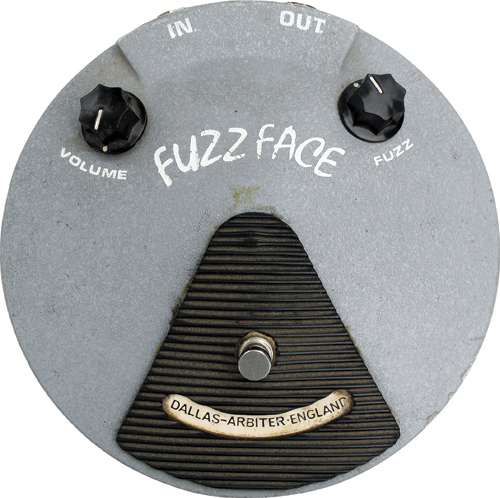 When Jimi Hendrix released his first album, 1967’s Are You Experienced, he launched a new level of guitar heroics as well as a sartorial fad for ruffled shirts and band jackets. He also fed a fashion for fuzz.

One of Jimi’s main weapons was the Arbiter Fuzz Face, a cheap, crude fuzz box that would become famous – and infamous – forever more.

Fuzz was nothing new. In fact, the search for good fuzz was long and proud. Early electric guitarists may have been inspired by saxophonists who created “fuzz” by honking their instruments to make them quaver and spit. Ike Turner got a righteous fuzz tone from his combo amp after it fell off his car roof en route to a session; that fuzzed-out sound graced arguably the first rock and roll record – 1951’s “Rocket 88.” Grady Martin lucked on a malfunctioning channel in a mixing board to produce his rough-hewn Nashville sound. Paul Burlison of the Rock and Roll Trio claimed he found his fuzz when a tube was knocked loose in his Fender Deluxe. But these were crude solutions, not always repeatable on demand or controllable under fire.

Electronics manufacturer Maestro understood, and in 1962 launched what was possibly the first fuzz effect, the Fuzz-Tone, which was soon heard on the Ventures’ “The 2,000 Pound Bee.” The most famous application was the Rolling Stones’ “(I Can’t Get No) Satisfaction.” And a young Jimi is believed to have sported a Maestro during his journeyman days with Curtis Knight.

When he relocated to London in 1966, the Maestro was an expensive rarity. But there was a new, low-budget, homegrown option – the Fuzz Face. Jimi plugged in, twisted on the fuzz, and recorded his second single, “Purple Haze.”

The Fuzz Face debuted in 1966, made by sax repairman and amateur drummer Ivor Arbiter, who ran the Drum City shop on Shaftesbury Avenue in London’s West End. Arbiter was famous for selling Ringo Starr a Black Oyster Pearl Ludwig kit in ’62, which he hastily inscribed with “The Beatles” across the front to make the sale, complete with the dropped “T” logo that became part of rock history.

Arbiter’s Fuzz Face mimicked the Maestro Fuzz-Tone, but in a simple – even simplistic – design aimed at the low-budget market. Based on a Schmitt Trigger squaring circuit, it used as few parts as possible; just two transistors, three capacitors, two potentiometers, and a double-pole/double-throw true-bypass switch.

Arbiter claimed he was inspired in creating the Fuzz Face’s sand-cast casing by the round microphone-stand base. With its two knobs – Volume and Fuzz – its DPDT switch, and semi-circular “Arbiter England” or later “Dallas-Arbiter England” logo, the effect looked like a face smiling up at you.

But the friendly Fuzz Face had several problems. First, as Roger Mayer, a 21-year-old electronics wiz who soon became Jimi’s mad-scientist effects man, explained, “It was such a basic circuit that most people in electronics would never have used it because it was fraught with many, many problems. By making the circuit with a minimal number of parts, it made the circuit virtually unrepeatable.”

Second, the germanium transistors of the day had such broad permissible manufacturing tolerances that getting a matched pair in one Fuzz Face was pure serendipity. “The circuit was so crude and so interdependent that if one transistor was a bit higher-gain than the next stage, you couldn’t use it,” Mayer said. “You had to get a balanced pair for the thing to sound right.” And because the Fuzz Face was built cheap, Arbiter wasn’t testing components to match them up.

Finally, the design of the circuit was temperature-sensitive. “It varied from day to day because the biasing of the circuit was rarely stabilized,” Mayer recalled. “It was crudely biased. It would work, but it rarely worked the same way twice.”

Jimi used the Fuzz Face for gigs because it was the cheapest available. While a Maestro cost £30, Arbiter’s was just £6. And that was a good thing. “The down side was that you needed a lot of them,” Mayer pointed out. “The problem Jimi and I had with the Arbiter was that you had to buy 20 to find a decent one. So I told him, ‘Let me take one Fuzz Face that works back to the lab and we’ll measure each component to see what’s doing what.’”

Mayer’s secret modification was simply to “blueprint” them – mix the components until he had matched sets.

Those first Fuzz Faces used PNP germanium NKT275, or sometimes AC128, transistors, which many players came to love for their fat, full sound. But when less-expensive silicon transistors became available, Arbiter quickly switched over. Some players found these too harsh and hairy, but others embraced the early effects using BC108C or BC183L transistors – and their increased reliability.

Jimi, too, used these silicon-transistor Fuzz Faces, but they brought a new issue. “Arbiter had taken no precautions at all in the design against radio,” said Mayer. “The silicon had much higher gain and frequencies than the germanium ones. This caused the actual device to become a radio receiver. When you connected the Fuzz Face to a guitar cable, the cable acted like a bloody antenna!”

Jimi toured the United States in ’68 and brought along Mayer simply to keep his gear alive. He remembers concerts where he had to run onstage to yank the Fuzz Face out because it was picking up (and re-broadcasting) AM radio pop songs through Jimi’s amps. “It was a nightmare,” he laughs. “The Fuzz Faces were very noisy, very temperamental. Many times in the States, we’d be swapping them out as he was playing. We’d have six of them onstage. It was frustrating for Jimi and totally out of control most of the time. Playing live, we were unsure of what was going to happen!”

Arbiter halted production of the original Fuzz Face in 1975. The design was reissued by Crest Audio, of New Jersey, in the late ’70s, then with a second version in the late ’80s. In ’93, Dunlop bought the name and today offers several versions with modern reliability.

Plugging a ’64 Rickenbacker 360 into a ’70s Dallas-Arbiter Fuzz Face with BC109C silicon transistors and then into a ’64 Vox AC30, you realize just how peaky the effect’s Fuzz control can be. You need to carefully balance the Volume with the Fuzz to get a warm sound. Otherwise, the fuzz can be all-consuming – unless, of course that’s the tone you want. But when you get it right with a good unit, the fuzz is glorious.

Mayer says Hendrix rarely used a Fuzz Face by itself.

“In the studio, we’d have some other circuits to put in front of the Fuzz Face to drive the unit differently. Of course, in the studio you can vary the voltage you’re running the Fuzz Face on, so we had much more control. I’d put different buffers with different equalization in front of them to drive the actual Fuzz Face from a low-impedance source rather than the high impedance of the guitar. Then we’d add the distortion after that with pre-EQ. Then we could also fuzz the device with post-EQ.

“You’re not going to get the tone that Jimi Hendrix got on a record with one simple device – that’s not going to happen, mate!”