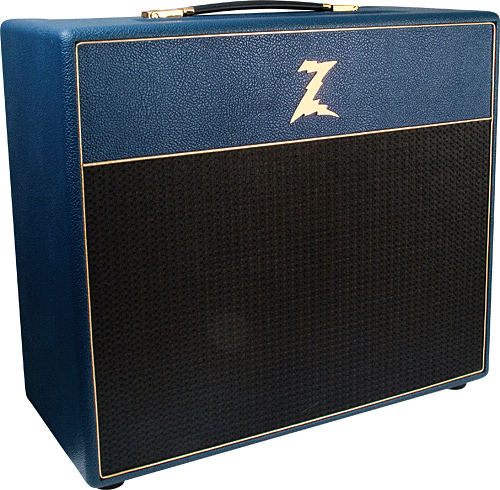 Originally designed as a head with a matching 2×12 cabinet, the Z Wreck came about at the request of country super-picker Brad Paisley and was a collaborative effort between Mike Zaite (Dr. Z Amplification) and Ken Fischer (Trainwreck Circuits). Recently, Dr. Z released the Z Wreck in a 1×12 combo format.

The Z Wreck Combo’s impeccable build quality is immediately noticeable; cabinetry, covering, piping, venting, and hardware are all first-rate. Dressed in blue tolex with gold trim and hardware accents, it is solid, tidy, and well-finished, inside and out. Its cab is designed with a first for Dr. Z; striving to maintain a grab-and-go ethos, builder Mike Zaite opted for 1/2″ baltic birch instead of the more-standard 3/4″. The design, he says, mimics classic Marshall Bluesbreakers combos, and he further cites drum makers who commonly use 1/2″ wood for its resonant qualities. Also, it has a 1/2″ floating baffle he says allows for better projection. These elements keep the Combo’s weight to 47 pounds with its Celestion Gold speaker (which by itself weighs just over nine pounds).

The top-mounted knobs are also a first for Z, as is the vent across the amp’s top, which Zaite says projects a bit of sound and helps avoid the boxy sound typical of a 12″ combo. The amp ships with a fitted cover with high-denier exterior and padded interior.

Plugging straight into the Z Wreck Combo with a Fender American Deluxe Telecaster, and starting with the Tone controls set to 12 o’clock, Volume at half past 9, and voicing at “Comfort” (the lower plate-voltage setting), the amp came to life with a full, well-rounded clean tone that was bright but not harsh, and rich with body – that “new-string sound” of the (almost) fresh strings on the Tele was immediately distinguishable. Adjusting the Bass and Treble slightly to the room, and setting the Cut knob between 10 and 11 rendered clean-tone heaven – articulate and meaty, with absolutely no thinness on the high strings and a fantastic smooth response to the touch. Both the neck and bridge pickup positions blossomed with tone.

Without changing any other settings, and simply switching the voicing to “Speed,” the attack and urgency of each note’s articulation intensified. Speed is less-forgiving and forces the player to concentrate not only on what they’re playing, but (perhaps even more) on how they’re playing. The amp is loud (no surprise for an amp in this class), but the tone is so good that one doesn’t give a second thought to the volume.

Adjusting the Volume to noon and switching back to Comfort voicing pushes the Z Wreck beyond squeaky, into total touch-and-crunch bliss. A simple roll-back of the Tele’s volume achieved whatever degree of clean was desired – from clean to an ever-so-slight bit of stubble on the note, to full beard. And when it’s time to solo, roll the guitar’s Volume back up and the Combo serves up snarly but well-defined notes smothered in a creamy overdrive with tasty harmonics on top.

Setting aside the Tele for a Les Paul Standard and turning the amp’s Volume up to just shy of 3 o’clock, the Z Wreck unquestionably rocks – hard. With superior midrange articulation, it handily delivers full-out high-gain tone useful for almost any “heavy” genre or high-gain situation. Perhaps the real beauty of the Z Wreck is that, even when cranked, simply rolling back the guitar’s Volume takes you right back to nearly clean or anywhere in-between, while the tone remains true to intention.

Dr. Z Amplification promotes this amp as something of a Swiss army knife – a plug-and-play amp no matter what you want to do, that will give you back what your hands and guitar give it. Believe it. The Z Wreck Combo delivers superior tone useable over a spectrum of styles, in a simple and efficient platform.