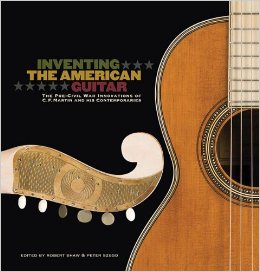 To start with the conclusion, this is hands-down one of the all-around best books on guitars ever published. From the scope of the coverage to the quality of the text and photos, the elegant design to the overall packaging, it’s simply glorious – an example all others guitar books should aspire to.

Now, back to the beginning. This is the essential book-end to your collection of the many titles available on 20th-century guitars. Subtitled “The Pre-Civil War Innovations of C.F. Martin and His Contemporaries,” it is the ﬁrst to delve deep into the story of the evolution of early American guitar design. While the era from the 1930s through the ’50s has often been considered the golden era of guitars, the authors make a solid case that the 1830s through 1900 was actually the most groundbreaking, creative, and critical.

That story centers around C.F. Martin, who has long been recognized as the godfather of American guitar design. The authors further cement his position here. As other early American luthiers went under, Martin proved himself both an astute businessman and a wily innovator, responding to opportunities in a market that he himself was key in creating.

Martin almost sacrilegiously abandoned the Austro-German style of lateral bracing of the guitar soundboard that he ﬁrst learned. In its place, he adopted Spanish-style fan bracing, which he then adapted into the X-bracing that soon became the hallmark of Martins – and many other modern guitars. As early as the late 1840s, he was crafting guitars that bore all the main attributes of today’s Martin guitars, except for their size.

The authors chronicle the development of body sizes, bracing styles, neck and especially headstock designs, neck-body joins, labels, and more – all in the kind of detail fans dream of. There are even glorious large photos of the wooden cofﬁn-style cases, which are in themselves works of art.

The history is spiced by proﬁles of 44 individual guitars each run across two-page spreads. These proﬁles include gorgeous images, detail photographs, bracing-conﬁguration drawings, and measurements. Among the most fascinating is the 10-string two-neck Martin harp guitar from 1859’60
and several James Ashborn guitars from the 1840s through the 1860s.

At the back of the book, along with a two-page spread of marquetry designs and detailed notes, there are a handful of measured scale drawings of milestone Martins on dramatic foldout pages.

Creation of the book was headed by Pete Szego, a collector and player of 19th-century American banjos. Well-known historians Richard Johnston, David Gansz, James Westbrook, Arian Sheets, and David LaPlante all contribute chapters compiled into this large volume. Most of the photography was by John Sterling Ruth, who deserves special kudos.

Publication of the book is tied into a forthcoming, year-long exhibition of Martin guitars at New York City’s Metropolitan Museum of Art entitled “Early American Guitars: The Instruments of C.F. Martin.”