Stompboxes range from organic, transparent circuits that let a guitar’s natural tone shine through, to effects that intentionally color the signal with gobs of sonic insanity. This trio of pedals from Walrus Audio and Celestial Effects truly covers all of those bases.

The Walrus Audio Deep Six, a studio-grade compressor in a little box, was inspired by the Universal Audio 1176, a legendary studio limiter known for giving guitars and drums that hard-rock smack in the ’70s (think Kiss, Aerosmith, and Led Zeppelin). The unit has a true-bypass on/off switch and controls for Level, Sustain, Attack, and Blend. It also converts 9-volt power from a battery or adapter to 18 volts to provide maximum headroom (i.e., the range of clean volume that doesn’t distort) for the player’s compressing pleasures (even when using humbuckers).

The Audio Deep Six is dead simple to use, like an MXR Dyna Comp or other floor box. Generally, the Level control is set equal or louder than the uncompressed guitar signal. Attack refers to how quickly the compressor reacts to each note – most players prefer it higher for single-note lead work and lower for more natural rhythm work. On their instruction sheet, Walrus even provides settings for popular sounds like “Blues lead” and “Brad Paisley-style/country chicken pickin’.” The critical knob, however, is Blend, which allows the player to ladle on heavy compression or back it off for more natural, uneffected tones.

Tested with a ’63 Fender Jaguar and a tube amp, the Deep Six was quiet but provided excellent response to picking nuances, making it easy to dial up a country twang sound, smooth country tones, and fierce blues sounds. The gain can be cranked for a slick high-voltage tone, or users can follow the lead of pros like Steve Lukather and Neal Schon, setting the Deep Six to a moderate level and leaving it on all the time for amore professional studio sheen. As most comp-heads know, just a dab’ll do ya.

Like any good overdrive pedal meant to embellish the natural gain of a tube amp rather than smother it with an “effect-like” fuzz or distortion, Walrus Audio’s Mayflower is a transparent booster that lets the guitar cut through the mix without losing its character. Unlike heavy distortions or fuzzes, this pedal allows a Tele to sound like a Tele, or an SG to sound like an SG. And that’s a good thing.

The Mayflower has true bypass, four knobs (Level, Drive, Bass, and Treble), and an on/off footswitch. This box is all about providing that special sauce needed to make a great guitar and a tube amp sing in harmony. There’s a natural, unforced quality that tubeheads will revel in – just plug into the Mayflower and enjoy the organic interplay between guitar and amp. Of course, the Mayflower will not make a crappy amp sound good, but it will make a good tube amp fuller and punchier. In testing, the Mayflower delivered fresh flavors and meatier overdrive sounds from amps and gave guitars bold, authentic textures, especially after dialing in the EQ controls on the pedal and the amp.

At the opposite end of the cleanliness spectrum is Celestial Effects’ over-the-top and wildly named Cancer Wah the Fuzz?, which is actually one mondo unit housing four pedals: Tube O.D., Muscle Fuzz, Octave Fuzz, and Fixed Wah. The Fixed Wah section has the same effect as leaving a wah pedal in a set position (i.e., the “cocked wah” booster trick perfected by Michael Schenker and Brian Robertson). The result is that cool, piercing sound that punches a hole through any stage mix. A single Wah Tone knob allows the user to pick frequencies ranging from from dark ’n’ smoky to sharp and eardrum-splitting.

The Octave Fuzz takes players to Jimi-ville with a vintage Octavia-like vibe. The effect has Volume and Fuzz knobs and an Octave on/off mini-toggle that can be adjusted for subtle to insane levels of farty fuzz, or to conjure up true shades of “Purple Haze.”

The Muscle Fuzz section is the heaviest, crunchiest part of the Wah the Fuzz? unit. Think Neil Young’s “Hey Hey, My My (Into the Black)” or other sick, garage-grunge riffery. A Tone A/B mini-toggle takes the attack from dark to sharp.

The JJ Tesla 12AX7 tube in the O.D. section of the Wah the Fuzz? provides classic ’70s overdrive tones. However, any of this pedal’s sections can be mixed and matched. Fuzzheads will spend many happy hours tweaking this exceptional stompbox. 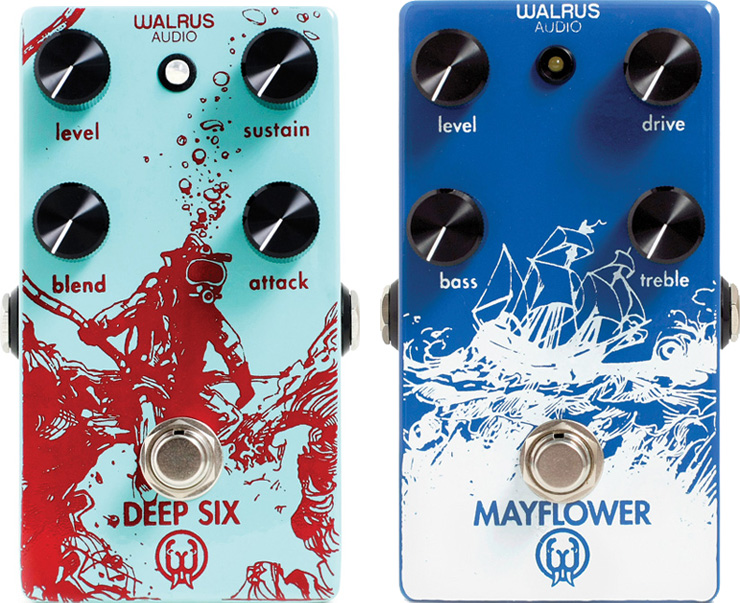