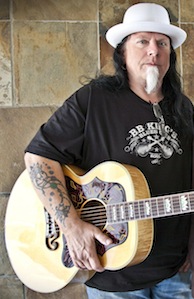 Guitarist Smokin’ Joe Kubek died after suffering a heart attack October 11. He was 58.

Kubek was born in Pennsylvania but grew up near Dallas, where he led bands that began gigging in clubs when he was 14. At 19, he was backing high-profile blues players in the area, including Freddie King; he was part of King’s band that was set to tour before he died in 1976. Kubek played constantly around Dallas, and through the years jammed with Albert King, Stevie Ray Vaughan, B.B. King, and others.

In ’89, Kubek met guitarist/vocalist Bnois King at a jam, and the two became fast friends. Forming an act that melded their styles, in 1991 they released Stepping Out, Texas Style, after which they began to tour internationally. In the years since, they recorded 15 albums, the latest being Fat Man’s Shine Parlor, which was released early this year.

“Joe was such a good soul. I loved him like a big brother and a hero,” said guitarist Pay Boyack, who knew Kubek for 21 years. “He was a great human, a master musician, and an inspiration. I first met him in 1994, when I signed to the same label and he called to say, ‘If you need any advice or help, let me know.’ From that moment, he was a supporter and mentor. Joe meant a lot to a great number of players because he appreciated their talent and made them feel like equals, which is a special quality.”

Beyond his status as a musician and mentor, Boyack recalled Kubek as a friend. “I’ll miss his sense of humor, his laugh,” he added. “We were neighbors, so I’ll miss seeing his van go past my house, his tattooed arm hanging out the window.”

In recent years, Kubek’s wife, Phyllis, has battled cancer, and Kubeck focused on caring for her.

“I know it was hard for him to go tour because it meant not being there for her,” said Boyack. “But, Joe was their breadwinner and did what he always had done – got in the van or on the plane and played for his fans.”

Kubek is survived by Phyllis, a step-son, and extended family.

Anyone wishing to contribute to Phyllis Kubek’s care can do so online at gofundme.com/2q6ek4f4 or by sending donations to Phyllis Kubek, c/o Piedmont Talent, PO Box 680006, Charlotte, NC 28216.