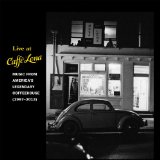 When one thinks of the Folk Boom of the late ’50s and early ’60s, the place that ﬁrst comes to mind is New York City. Sure, Los Angeles had the Ash Grove, Chicago the Gate of Horn, but New York had Gerde’s Folk City, the Gaslight, Night Owl Café, the Bitter End, and of course Washington Square Park, where banjos and acoustic guitars could be heard every weekend afternoon, played by pros and hobbyists alike. But in 1960, three hours north of Greenwich Village, in Saratoga Springs, New York, the late Lena Spencer opened the 75seat coffeehouse that still bears her name, where a dizzying array of traditional folk interpreters and singer/songwriters perform to this day.

The problem with too many anthologies (of any genre) is that their repertoires are dictated by contractual limitations. As impressive as 1984’s Bleecker and MacDougal four-LP box is (if you can ﬁnd it), it’s the story of one label associated with the folk movement – Elektra Records (with the exception of two of its 30 artists, leased from rival Vanguard). If Tompkins Square Records had to jump through contractual hoops to compile the 47 tracks contained in this three-CD box, it doesn’t show. Neither does the fact that the music, spanning 1967 to 2013, had to be digitized from myriad sources.

And, although overlooked by the 30-page booklet’s essays, jazz greats John and Bucky Pizzarelli show that more than folk music made its way to the club on Phila Street, with “I Like Jersey Best.” Folk music can be a tad academic or precious, but this stuff is rich and exciting. Reportedly, some 700 shows from Caffe Lena have been unearthed. This is a good start, but hopefully not the last we’ll hear from Lena’s stage.