Home Music Iggy and the Stooges and Special Guests 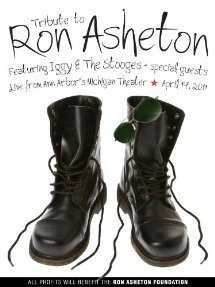 The Stooges’ inﬂuence on ’80s and early ’90s indie scenesters is unimpeachable. For more than a quarter-century, cognoscenti have clamored to comprehend the quartet’s long shadow, more often than not dubbing frontman Iggy Pop with sobriquets like “The Godfather of Punk.” Understandable, given Pop’s performance chops, but such assessments overlook the cornerstone of the band’s sublime scuzz: founding guitarist Ron Asheton, who passed away in January 2009.

Shot in the band’s hometown of Ann Arbor, Michigan, in April 2011, Tribute attempts to rectify this by presenting a set of Stooges classics with mixed results. Indeed, Pop proves he can still induce mayhem, and classic Stooges riffs as laid down by Raw Power guitarist James Williamson and Radio Birdman’s Deniz Tek still manage to sound timeless, primitive as they may be. Unfortunately bassist extraordinaire Mike Watt, with the Stooges since they re-formed in 2003, is virtually buried in the mix – doubly shameful considering MC Henry Rollins’ preshow spiel on the importance of the band’s rhythm section. Also puzzling is the extraneous string and horn sections that manage to sully a trio of primo Funhouse cuts.

Depending on how seriously you take your Stooges, Tribute could be a real cool time or no fun at all.