Reverend Guitars recently came to the rescue of  Doran Connell, who was the victim of house fire in which he lost nearly everything, including his guitars. Amongst the ruins were Connell’s two charred Reverends – a Charger and a

Flatroc – which still functioned in spite of their pickup housings having melted and their knobs being fused. Connell shipped the guitars back to Reverened, where guitar tech Zack Green opted to take on the Charger for restoration.

The guitar’s neck was unplayable and its plastic had melted, but the body and metal hardware simply needed cleaning, so Green scraped and washed the body several times, then sealed it with five coats of clear, leaving it as scorched testament to what the guitar had survived. The tailpiece, control plate, jack plate, 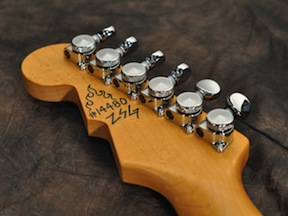 and neck plate were also cleaned but left imperfect, and Green replaced the pickups and the neck, giving it a special serial number, with flames, to commemorate the restoration. The guitar was re-named The Phoenix and it was sent back to Connell.