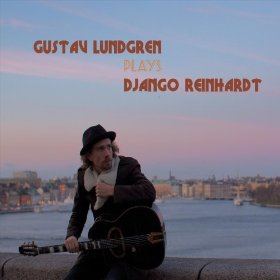 Swede Lundgren is proliﬁc in both the worlds of standard jazz guitar and Gypsy jazz, with seven previous releases to his name plus numerous others as a sideman. He has proved himself adept on both acoustic and electric in multiple formations from intimate trios to horn-powered big bands. But this new album stretches him in new ways.

Throughout, Lundgren has chosen mainly to cover Django’s electric bebop on acoustic guitar. In the late 1940s and up until his death in 1953, Django rejoiced in the volume, sustain, and yes, even the overdrive of his electriﬁed Selmer in recasting his early swing into the sound and fury of bebop. Lundgren’s acoustic fretwork puts the emphasis on a different sort of technique in relying on purely melodic improvisation. He’s backed by a pounding acoustic rhythm section, whereas Django had updated his sound to rhythmic chordal stabs in the best 52nd Street tradition. It’s an ambitious venture, and the result is inspiring.

He kicks off with “Impromptu,” Django’s ferocious reworking of both a Dizzy Gillespie bop tune intermixed with the waltz “Dark Eyes.” Lundgren’s fretwork is fast but sure at a tempo that would tie most players’ ﬁngers into knots. His version of Django’s worldweary ballad “Anouman” on acoustic guitar is gorgeous – and challenging, at 7:25. Django’s version was played mostly by his saxophonist, so hearing the songs translated fully to guitar is enlightening. Lundgren’s playing of both the theme and his extended solo is endlessly creative, accented by stirring arpeggiated runs as well as bass-to-treble and volume dynamics.