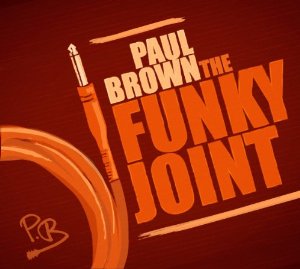 A lot of people paint the smooth jazz world with a broad brush that sometimes ignores the players who play with soul, intensity, and smartness. Paul Brown would be one such player. While his playing is ﬁrmly rooted in jazz, his R&B grit and amazing ability to write a memorable melody make his records, including Funky Joint, interesting.

Elegant would be a good word to describe “As Clear As Day,” with its minor-key soloing from Brown and guest saxophonist Boney James. Like most of the songs, the groove is a major part of the equation. Many times it’s simple, like “Say It Like It Is”; other times it resides in that nebulous land between jazz, soul, and funk, as in “Backstage Pass” – a perfect example of Brown’s soulful single notes and octaves, with a middle section that zips through a jazzy set of changes before heading back to the funk.
Brown proves to have a growly, soulful voice on two vocal outings here: “I Get A Feeling,” with its gospel-tinged funky and bluesy playing, and “Love Don’t Come EZ”, a radio-friendly soul tune. Melody is the key word for “From The Ground Up,” a pop tune featuring Brown’s octave soloing, Euge Groove’s saxophone, and the drumming of Ricky Lawson.

Brown’s not exactly breaking any new ground here, but his Benson- and Carlton-inﬂuenced chops, both as a player and a writer, are worth a listen for their soulfulness.

Howard and the White Boys – Made In Chicago