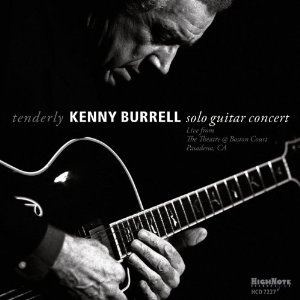 Jazzman Kenny Burrell boasts some 40 records to his name as a leader and dozens more as the consummate sideman. Amazingly, he still has much more to say and, on this new solo record, speaks with eloquence.

Burrell made his recording debut in 1951 with Dizzy Gillespie’s sextet. Now, six decades on, he remains one of jazz guitar’s greats, still true to his blues and bebop inspirations. Tenderly captures two concerts in Pasadena, California, in 2009, along with two ﬁnal tracks from 2007 and 2008 shows. The sound throughout is intimate, almost studio-like, but with the drive of a live performance adding that spark.

Burrell winds his way through an incredible song list. He begins with “Tenderly,” playing with a light, ﬂeet-ﬁngered touch, the sonic quality so clear you can almost hear the warmth in the wood of his Gibson Super 400. Other highlights include “Autumn Leaves,” a Billie Holiday medley, “What A Wonderful World,” and Burrell’s own “Remembering Wes.”

The centerpiece is a Duke Ellington “montage” that touches on seven Duke songs within Burrell’s own improvisations. The combination creates a marvelous whole.