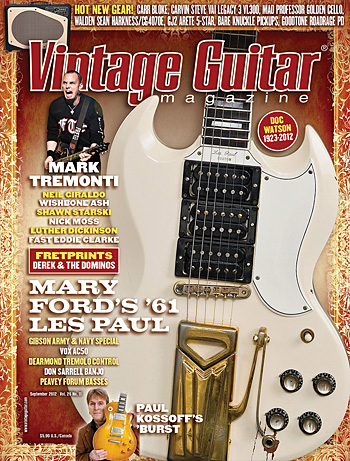 We tell you about Gary and Gail Nichols, a guitar-collecting couple who recently added a nice historical touch to their gathering. We also speak with Mark Tremonti, the hard-playing co-founder of Creed and Alter Bridge, whose latest project puts him out-front. We then catch up with Paul Kossoff’s famed sunburst Les Paul, and deliver the usual array of detail-laden goodness, with George Gruhn and Walter Carter examining the Gibson Army & Navy Special, Michael Wright schooling us on the Don Sarrell banjo, Willie Moseley explaining why Peavey’s Forum basses deliver on their builder’s promise, Michael Dregni talking about the “quaint electromechanical device” known as the DeArmond Tremolo Control, and Dave Hunter examing the beginnings of the Vox AC50.

And of course, Dan Erlewine, Wolf Marshall, Will Kelly, Dan Forte, and Michael Dregni do the usual bang-up job.

Couples Connection
Mary Ford’s ’61 Les Paul Custom Finds a New Home
From a low-end Yamaha acoustic to a prime set of PRS Dragons, instruments of many ilks have been welcomed to the wood-and-wire gathering of guitars belonging to Gary and Gail Nichols. Last January, they added a guitar that gave the collection instant historical-heavy-hitter credibility. By Ward Meeker

Mark Tremonti
Rock Star, Amp Snob!
Many guitar heroes spent more than their fair share of time stowed away in their bedrooms, playing guitar while other kids in the neighborhood played baseball, kick the can, or spin the bottle. The hard-charging co-founder of Creed and Alter Bridge is another member of that “lone wolf” club. His latest project puts him out-front. By Ward Meeker

The Legend of Paul Kossoff’s Burst
The story of Paul Kossoff’s famed sunburst Les Paul begins in 1974 with a band that opened for Free in the U.K. Handling guitar for Beckett at the time was a young Wearside lad named Arthur Ramm. By Pete Prown

The Gibson Army & Navy Special
Gibson’s history is filled with unusual instruments, from Orville Gibson’s lyre mandolins to electric banjos to self-tuning guitars. For the ultimate combination of unique design, rarity, and historical importance, this double-soundhole version of the Army & Navy Special would be hard to equal. By George Gruhn and Walter Carter

The Don Sarrell Banjo
Don Sarrell was an electrical engineer by trade, but music was in his blood – especially old-timey bluegrass. Not only could he play the music well enough to win several high-profile competitions, but this instrument, which he built in 1999, is the work of someone who very much knows their way around a wood shop. By Michael Wright

Peavey Forum Basses
This line, launched in the ’90s, exemplified the builder’s efforts to adhere to its founder’s mantra of “quality equipment for working musicians at fair prices.” By Willie G. Moseley

The Vox AC50
Where the evolution of guitar amplification traces musicians’ needs to be louder, the history of Vox follows, in particular, that need for one band – The Beatles. This amp was the result of a desperate effort by founder Tom Jennings and engineer Dick Denney. By Dave Hunter

The DeArmond Tremolo Control
A quaint electromechanical device, hidden within its small metal box is an electric motor with a spindle that shakes a vial containing electrolytic liquid. Signal runs through the fluid, and as it sloshes up and down, it allows more or less signal to pass, thus modulating the signal’s output volume. The result? True voodoo! By Michael Dregni

Shawn Starski
His Own Rules
By John Heidt

The (Way) Back Beat
’60s Guitar Adventures at Ampg, Part 2: From Studs to See Throughs
By Peter S. Kohman

Shop of Hard Knocks
Re-Purposed for Tone, Part 2
By Will Kelly