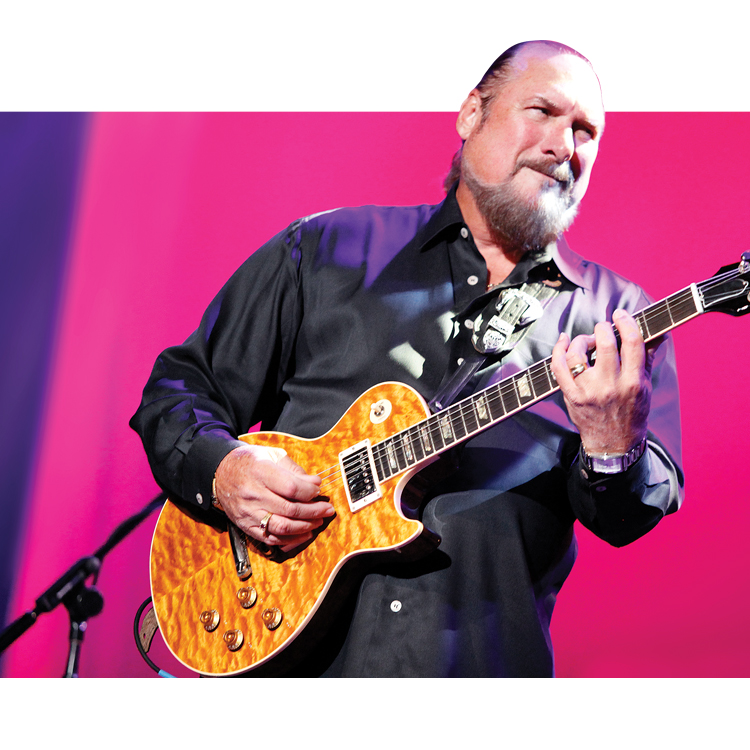 All but forgotten today, with his low-slung guitar, stylish rhythm licks, and tasty leads, Lowman Pauling was one of the great guitar heroes of the ’50s. Guitarist for the R&B doo-wop band the 5 Royales, not only did Pauling pick melody lines and play leads, he also composed many of the band’s songs, sang in the five-piece group, and served as a sort of musical director.

Pauling was one of Steve Cropper’s first guitar inspirations. “Bo Diddley had the rhythm and Lowman Pauling had the notes,” he said.

Cropper is paying credit to Pauling and the band with Dedicated: A Salute to the 5 Royales, a new album with 15 5 Royales songs re-made with Cropper’s funky licks and vocals from special guests.

Cropper remembers the night he and bandmate Donald “Duck” Dunn snuck into a 5 Royales show in the Beverly Ballroom near Memphis. Their band played downstairs at the Tropicana, but when a big act came to town, the club closed as the promoters knew everyone would be climbing the stairs for the main feature.

They carried that inspiration with them into the Mar-Keys, and Booker T and the MGs.

“Lowman Pauling looked great onstage,” Cropper explained. “He was the action guy. He had the moves, man. He could do that shuffle. He had this long strap that just blew me away – I’d never seen that before, you know. Straps only came in certain lengths – they still do. I couldn’t wait to get home and put belts together to make my own long strap for my Gibson Byrdland.”

Cropper and Dunn later crossed paths with Pauling. In fact, the CD’s cover picture was taken at the Royal Peacock Lounge in Atlanta, with Cropper wearing his Byrdland slung low in emulation of Pauling.

“The Mar-Keys had a record, ‘Last Night,’ which I think was number three in the nation, and I didn’t know the 5 Royales had played the Royal Peacock Lounge two or three weeks prior; our tour followed the 5 Royales and Ike and Tina Turner for about four weeks. I don’t know how we made it!”

Cropper borrowed more from Pauling than just strap length; his melodic style was one of Cropper’s main inspirations. “In the Mar-Keys, we always played the 5 Royales’ ‘Think.’ That’s the one, as far as those stamp fills… I copped that from Lowman, and I’ve been using them forever on all the Stax stuff.”

The idea of giving thanks to Pauling came from the album’s co-producer, John Tiven. After releasing three solo albums from 1969 through the early ’80s, Cropper he was in no rush to try again. “John called one day and said, ‘How would you enjoy doing an album with nothing but 5 Royales songs, as a tribute?’ I went, ‘Wow! Why didn’t I think of that!’”

The duo listened to the 5 Royales’ catalog and selected songs. Cropper then was faced with the question of how faithful he should be to the originals.

“I called John and said, ‘You know, it’s not impossible to copy Lowman’s licks, but how close do you want me to be to this?’ He said, ‘I don’t want you to be that close at all. I want you to play Steve Cropper.’

“Lowman always played very melodically,” Cropper added. “So where he played definite lines, those are the lines I picked up on, like intros and that kind of stuff. The rest of it, I’m sort of just on my own. I did most of those important licks on a session, played rhythm, then went back later and overdubbed the solo stuff. So there’s a couple there where we have two or three tracks and left them in there – made one pass, made another pass. We just kind of put them together and said, ‘Hey, that sounds pretty good!’”

Cropper was happy to play guitar, but preferred not doing vocals – especially on an album of doo-wop tunes. “I proved to myself long ago that I’m not really a singer – I never thought I was one anyway. If I had my preferences, I’ll just be a member of the band and have fun doing that; I love backing other people.”

So Cropper and Tiven began calling friends; Sharon Jones added vocals to “Messin’ Up,” Brain May sang and played guitar on “I Do,” Lucinda Williams sang “When I Get Like This,” and there are more tracks featuring B.B. King, Steve Winwood, Buddy Miller, Delbert McClinton, Bettye LaVette, and others.

Cropper played much of the rhythm parts using a vintage Fender Telecaster from his Stax days. He still has the tweed Fender Harvard he used to record “Green Onions,” but opted for the old Quad Reverb used on many later Stax tracks.

For the lead lines, he used his stage workhorse Peavey. Some solos employed the Quad Reverb, and “…some were done at John Tiven’s house and we went direct.”

What about effects pedals? “Naw, just straight into the amp,” Cropper said. In fact, he has never been a big user of effects. “I use an A/B box,” he laughed. “One side goes to the tuner, the other goes to the amp.”

Perhaps the hottest track on the album is an instrumental version of “Think.” Cropper had long played the 5 Royales’ version with the Mar-Keys, but for Dedicated, Tiven suggested they cover the funkier James Brown arrangement. On the track, the band simply cooks. “Steve Jordan was there playing drums, and Lord have mercy, we didn’t ever want to stop playing it!” Cropper explained. “We got through, and he and I were laughing. I said, ‘Guys, that’s the way you make records!’ Just spontaneous.”

Rich Robinson and Marc Ford Of The Magpie Salute