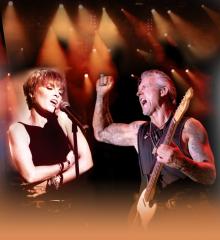 Pat Benatar and Neil Giraldo will tour the U.S. this summer with Journey and Loverboy. An influential couple in rock and roll, the two have produced hits including “Love Is a Battlefield,” “Hit Me with Your Best Shot,” “Heartbreaker,” “Promises in the Dark,” and others. The duo has been married and making music together for more than 33 years, with several multi-platinum albums, Top 40 singles, Grammy awards, and American Music Awards to their credit.

Giraldo serves as producer, arranger, co-writer, and lead guitarist for the singer, and is also a multi-instrumentalis known for helping shape Benatar’s sound and helping create its for John Waite, Rick Springfield, Kenny Loggins, and other artists. For more, visit benatargiraldo.com.  You can read VG‘s in-depth interview with Giraldo at vintageguitar.com/2967/neil-giraldo/.