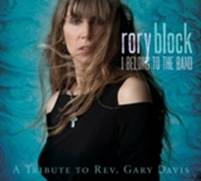 Stony Plain Records announces a May 29 release date for the new CD from multi-award-winning blues singer/guitarist Rory Block, I Belong to the Band: a Tribute to Reverend Gary Davis. The new CD is the third in what Block calls her “mentor” series saluting blues masters who greatly influenced her as a musician. It follows the release of similar tributes to Son House and Mississippi Fred McDowell, for which her CD, Shake ‘em on Down, earned Blues Music Award nominations in the Acoustic Artist and Acoustic Album categories for Block at the upcoming event in Memphis on May 10. The disc features Block on vocals and guitars, including her signature model OM40 Martin, as well as a D-28 Merle Travis prototype.

Block will support the album with extensive international touring. For more, visit roryblock.com.