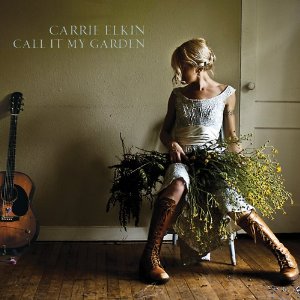 How many versions of the song “If That Mocking Bird Don’t Sing” have you heard? I’ve listened to more than I can count on all my digits. So when I heard Carrie Elkin veer into “Mocking Bird” during the chorus of “Jessie Likes Birds” I wondered where she was going with it. What followed was a virtual tutorial on how to build a song around an older song to create a new one. This combining of old and new populates much of Elkin’s musical landscape. Elkin lives in Austin, where she’s part of the folk/roots music scene, and Call It My Garden is her second solo CD.

Usually, singer/songwriter albums fall into one of two categories – those that highlight songs and those that feature the singer. Occasionally, an album such as Call It My Garden does both. Elkin’s voice is direct and guileless, with little in the way of fancy bits. But she displays a breadth of emotion and nuance that eludes many with more flamboyant pipes. Her country influenced vocals avoid the cornball clichés while retaining an intimate and natural quality.

Elkin’s songs aren’t musically complex, yet her melodies never fail to deliver a few surprises. On “Iowa,” she builds a delicate structure that demonstrates how a simple arrangement can let a song bloom. “Berlin” begins with just lead vocals and Trevor Smith’s minimalist acoustic guitar. By the end of the song, she has built a wall of sound.

Folk music used to be limited as a musical category, but artists such as Elkin show that even a well-trodden road has plenty of paths waiting to be explored.