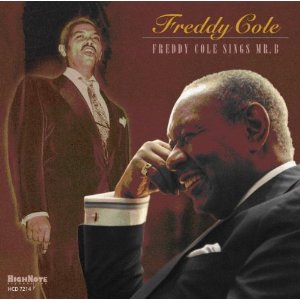 Asked what younger jazz guitarists stood out to him, in his March ’10 VG interview, George Benson listed Norman Brown, Mark Whitfield, Russell Malone, and “the guitar player who’s playing with Freddy Cole.” He may not have remembered Randy Napoleon’s name, but he called him “spectacular.”

The 33-year-old previously played on Cole’s live Dreamer In Me CD, backed vocalists Michael Buble and Melissa Morgan, collaborated with organist Jared Gold, and was a member of the Clayton-Hamilton Jazz Orchestra. In addition, Napoleon’s 2006 solo album, Between Friends (featuring another former leader, pianist Benny Green), showcased what Benson called his “allfingers
approach.”

Napoleon arranged 10 of the album’s 12 songs – handling the doubly daunting task of doing justice to Cole’s voice (very similar to his legendary brother, the late Nat “King” Cole) as well as songs associated with Cole’s friend and mentor, Billy Eckstein. The Brooklyn native approaches these chores with the same sensitivity and insight he brings to his guitar playing – from the solo arpeggios that support Cole’s honey-toned vocal on “Tender Is The Night” to the octave runs that follow, as the ensemble joins in to establish a relaxed, swinging groove, before he trades a tasty single-note solo with special guest Houston Person’s tenor sax. For “Cottage For Sale,” the sad tale of a dream cottage now abandoned, Cole asked for a George Shearing feel, and Napoleon cleverly references the optimistic “Folks Who Live On the Hill” in the intro.

Throughout, he coaxes a warm but round tone from his Stadler archtop (a 17” Free Verse with floating humbucker) and reveals his biggest influences, Wes Montgomery and Joe Pass. Others “who swing and have a deep blues feeling” – including Benson, Barney Kessel, Grant Green, and Charlie Christian – are evident on “Jelly, Jelly.” A fitting tribute to them and, of course, to Mr. B.