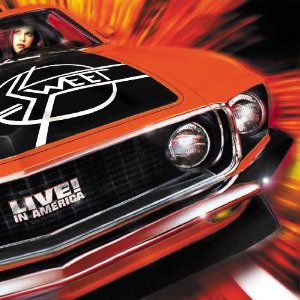 Sweet – the ’70s glam-pop act that’s almost as famous for its hairdos as its music – is today actually two bands touring under the name. The U.S. version that recorded this disc is led by original bassist Steve Priest, while another, led by guitarist Andy Scott, mostly tours the U.K.

On guitar, Priest has hired veteran English guitarist Stuart Smith to play Scott’s old parts, and he ably lends the kind of heavy, melodic, and snotty guitar riffs that highlighted the glamguitar era of the mid ’70s. His perfectly old-school lead on “Blockbuster” is a fine example. And rest assured, all the classic Sweet material is covered here, from “Fox on the Run” to the bubblegum hit “Little Willy,” as well as their ELO-soundalike gem from 1978, “Love Is Like Oxygen.” Capping it off is their glam masterpiece, “Ballroom Blitz,” replete with famously genderbending vocals.

But why would someone buy a CD from a band that has one-fifth of its original lineup? Well, there’s the fact the original Sweet never released a live album, so this does fill a niche, of sorts. Also, considering the performances are true to the original recordings and feature high-quality musicianship, Live in America becomes a pleasant stroll down glam-band memory lane. And blissfully, no one in the current group is wearing the goofy “long hair and bangs” look pioneered by Sweet more than 35 years ago – some things
are best left in the past!