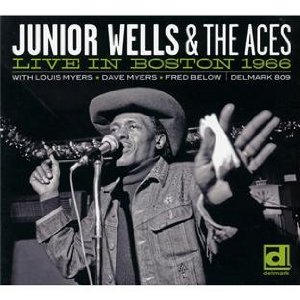 Junior Wells released enough mediocre product in his lifetime that it’s easy to forget what a great stylist and showman the Chicago bluesman was. This hour-plus live set, recorded at Club 47 in Cambridge in ’66, is a vivid reminder.

The harmonica great cut memorable singles in the ’50s, but his long-playing debut didn’t come until 1965, with Hoodoo Man Blues, a true classic of Chicago blues. It featured Wells in a bare-knuckled quartet setting (with “Friendly Chap,” better known as Buddy Guy, on guitar) – a format that suited Wells since his days with the Aces in the early ’50s.

Wells and Little Walter Jacobs both fronted the trio – drummer Fred Below with brothers Louis and Dave Myers on guitar and bass – when they swapped places as members of Muddy Waters’ legendary band. Waters’ ensemble cut the dye for all Chicago blues bands that followed, but the Aces lent a jazzier touch to the concept.

Louis Myers is too often a glaring omission in discussions of blues guitar greats, probably because of his sideman status. But, along with Jimmy Rogers’ work with Muddy, Robert Lockwood’s with Sonny Boy Williamson, and Hubert Sumlin and Jody Williams behind Howlin’ Wolf, he made an art out of the backup role, especially when it came to accompanying the harmonica.

But, like Lockwood, he could launch into jazz-inflected excursions – possibly homage to his earliest influence, Lonnie Johnson. After a veritable master class in Chicago blues, the trio (sans Wells) closes the set with a break instrumental, with Myers handling bebop runs (sprinkled with octaves) with ease. Wells also features him on a rendition of Freddie King’s “Hideaway” that leaves no doubt he could have gained wide recognition as a lead guitarist, had he chosen that path.