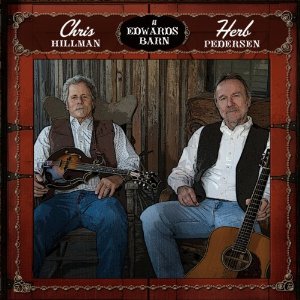 In a way, it’s a shame Hillman and Pedersen didn’t record this live album as a duo, as they often appear in concert. Because seeing two voices, an acoustic guitar, and a mandolin re-create “Eight Miles High” with seemingly nothing missing has to be heard to be believed.

Instead, they’re joined by their Desert Rose Band bassist (this time on upright) Bill Bryson, Boy Howdy guitarist Larry Park, and fiddler David Mansfield, whose Heaven’s Gate score was perhaps the saving grace of one of Hollywood’s most infamous flops.

Long before Desert Rose, Hillman and Pedersen crossed paths – inevitably, considering their bluegrass roots and connections to L.A. rock, country, and folk acts. Hillman, of course, abandoned his mandolin to take up (literally – he’d never played one) electric bass in the Byrds, and later formed the Flying Burrito Brothers with Gram Parsons and joined Stephen Stills’ Manassas. Pedersen got his start with bluegrass greats Vern & Ray before joining the Dillards, but is mainly known for his multi-instrumental and vocal session work (with Linda Ronstadt, Kris Kristofferson, Emmylou Harris, James Taylor, John Denver, Gordon Lightfoot, Dwight Yoakam, and countless others).

Though the format here is essentially bluegrass (minus banjo or Dobro), the repertoire touches on folk-rock (“Turn, Turn, Turn”), country-rock (“Wheels”), Bakersfield honky-tonk (“Love Reunited”), and even psychedelia (the aforementioned “Eight Miles High” and a lesser-known Byrds single, written by Hillman, “Have You Seen Her Face”), as the two revisit their respective resumes.

The duo’s telepathic vocal blend rules the day, but the quintet also impresses instrumentally, with Hillman, Park, and Mansfield taking turns on seasoned solos that are appropriately to the point – and to the heart of each tune.

Adrian Raso – Clean Up The Mess