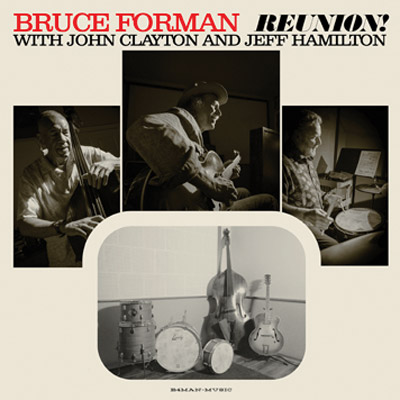 Bruce Forman had a simple concept in honoring the four 1957-’60 Poll Winners LPs that teamed Barney Kessel, bassist Ray Brown, and drummer Shelly Manne to celebrate their wins in various jazz magazine polls. Forman, who knew and worked with Kessel, recruited two latter day masters – bassist John Clayton and drummer Jeff Hamilton. Forman played Kessel’s 1946 Gibson ES-350 (featured in VG last month), which he owns. Clayton, the owner of Brown’s upright bass, used it, and they borrowed a set of Manne’s drums for Hamilton to use.

Forman’s “Feel the Barn,” and “Rope-A-Dope” evoke the wit and swing of the original albums as he ably moves from chord melody to single-note passages and back. On Kurt Weill’s “This is New,” he invokes the famed intro Kessel played on Julie London’s ’50s vocal hit “Cry Me a River.” For Ray Brown’s “Gravy Waltz,” Forman offers a rhythmic intro before Clayton articulates the simple melody. “Hammer’s Back in Town” showcases Hamilton’s free-flowing brushwork.

Rather than re-create the original Poll Winners recording of “Green Dolphin Street,” Bruce wittily infuses it with elements of the flamenco classic “Malagueña.” The trio also offers a stately, eloquent rendering of “Stardust.”

From start to end, Forman and his bandmates affirm both their virtuosity and the legacies of Kessel, Brown, and Manne.