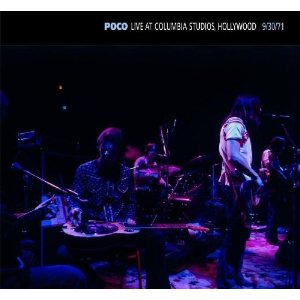 Part of a new series that gathers unreleased live stuff, we find the first-generation country-rock band in transition.

Even amidst many personnel changes, Poco’s focus was on harmony vocals and the pedal steel of Rusty Young, one of the instrument’s pioneers. He could burn on a solo that was pure rock and roll and make the instrument sound like an organ by using a Leslie and other devices. Whether he was soloing or floating in the background of a country ballad, Young was the driving force behind this band. His dobro playing also highlights several cuts here and is tasty as it comes.

Lead guitarist Paul Cotton influenced the band in a stronger rock direction than it had in its first incarnation. A good example is the good-time boogie of “Railroad Days,” a stomper with tons of great playing from Cotton and Young. While the guitars form the basis of every song, gorgeous vocals from Richie Furay, Tim Schmit, and the rest of the fellas sound angelic, even on the up-tempo country tunes.

This band broke ground for a lot of bands in the ’70s, and this live record affords a chance to hear it at an early stage.