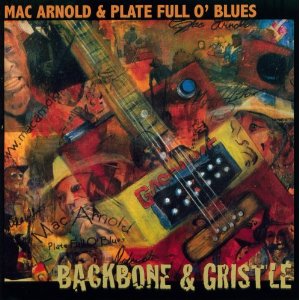 On one of this album’s best cuts, “Gas Can Story,” Mac Arnold tells of how his then 10-year-old brother, William, so desperately wanted a guitar he made one from a gasoline can with “strings from the windows” and frets fashioned from coat hangers. When his brother moved on and (we hope!) up to a real guitar, five-year-old Mac picked up the homemade instrument and began teaching himself to play. Showing a determination at least equal, Mac – a lefty – flipped the guitar over and learned to play it upside down. No wonder this album is called Backbone & Gristle!

Grown-up Mac follows the story with a song played on a similar gas-can guitar made a few years after the first. The story is touching, the guitar surprisingly tuneful, and the satisfying results of Arnold’s dedication are here to be heard.

The album includes live and studio versions of Arnold’s message to youth, “I Can Do Anything.” It’s hard to argue the claim when it comes from someone who has gone from woodshedding on a gas can to playing in a high school band with James Brown to playing bass with Muddy Waters and John Lee Hooker to working as an associate producer on “Soul Train” and news correspondent for the Ford presidential campaign. A man with a genuine connection to some of American music’s immortals, Mac Arnold is also worth paying particular attention to when he steps out front.

This article originally appeared in VG’s Aug. ’08 issue.  All copyrights are by the author and Vintage Guitar magazine.  Unauthorized replication or use is strictly prohibited.