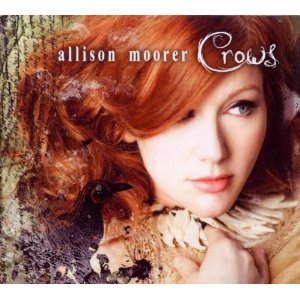 Allison Moorer couples a pitch-perfect voice with an edge you rarely find in commercial country music. Her first recordings displayed a rustic rock-and-roll leaning you’d expect from someone with her looks and vocal abilities. But her migration to NYC with her husband, Steve Earle, has pushed Moorer to the grittier side of country.

Moorer wrote 12 of the 13 songs on Crows, and not a single one is a lightweight ditty. Even the song order and pacing aren’t typical for a country release. Instead of starting with an upbeat two-stepper, Moorer begins with the dark, Gothic-flavored ballad “Abalone Sky.”  This somber mood threads through most of the songs. Produced by R.S. Field, the sound is lush and lovingly nuanced. Some tunes even employ string sections. Guitar great Richard Bennett plays on two cuts and Joe McMahan adds electric guitar, steel guitar, and celestaphone. Moorer handles all lead and backing vocals, piano, and most of the acoustic guitar parts.

Many recording artists would play it safe when they released an album on a new label. But here, Moorer creates music that remains true to her muse – one who sweats and suffers in the real world rather than languishing in the Nashville’s mirror-ball fantasy land.