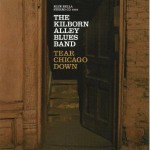 There may not have been a blues bandleader since at least the mid ’60s who has not turned to his rhythm section and asked, accusingly; “Do you guys even know how to play a shuffle?” It’s a safe bet that question has never been asked of Kilborn Alley’s Chris Breen (bass) and Ed O’Hara (drums) – among the best at holding the reins since Jerome Arnold and Sam Lay did it for the early Butterfield Band. The two help fire the Kilborn’s music with the verve that marked the newly electrified blues pumped from the big beautiful Seeburg jukeboxes in the clubs of post-WWII Chicago’s South and West Sides. Authentic, soulful, expertly skilled, this band is madly exciting.

There’s no mistaking the guiding spirit of John Lee Hooker behind the album – and in singer/guitarist Andrew Duncan’s playing, in particular. Duncanson’s enthusiastic John Fogerty-throated vocals (“I’m Spent,” “She Don’t Know”), guitarist Josh Stimmel’s Robert Jr. Lockwood turns (“Fire With Fire”) and Joe Asselin, an absolute banshee on the harp, factor in the excitement. But what puts Tear Chicago Down above the average contemporary blues release is first-rate songwriting. Any bunch of good players can wrap snappy licks around a traditional progression, but how long has it been since a blues lyric broke your heart? The B.B. King/Charlie Foxx style plea for America’s troops to “Come Home Soon” comes close. And only the truly hard-hearted wouldn’t feel for the poor sap, duped unawares into crime, who must spend “Christmas In County.” “Crazier Things” is a direct “adaptation” of Muddy Waters but light-fingered though they may be, this band operates with style. And respect. Much of blues’ traditional changes and melodies are almost de rigueur anyway. If another “Smokestack Lightning” is to be written, the Kilborns, taking collective composing credit here, could be the ones to do it.

Putting the cherries on top, producer Nick Moss adds deft guitar, soloing on “Come Home Soon” and the multi-talented/ridiculously versatile Gerry Hundt, who engineered, plays organ on most of the disc and adds unique blues mandolin to “Crazier Things.”

Bill Dixon – Guitar Collecting: How I Built a $65,000 Collection