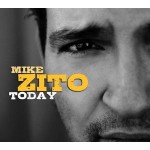 Mike Zito’s debut disc is brimming with Texas-style fire and soul, even though he’s from St. Louis!

Zito uses a variety of Strat tones and employs chops chock full of soul. His vocals have a throaty, pinched delivery, and his songs here are well-written, with nods to funk, blues, and modern rock. “Universe” is a mix of all three, with crunchy chords, a strong, bluesy vocal, great lyrics, a nasty solo with heavy wah in the middle, and a heavy rock solo out. “No Big City” is a funky rocker with great changes and a good show of his guitar-soloing skills. On cuts like “Hollywood” he proves he can write songs that have musical hooks that stick in your head. The repeated figure is impossible to forget. “Holding Out For Love” lets Zito stretch a bit, opening with a nice octave figure that reappears, with fine soul-music changes in between.

There are also great acoustic moments. “Time to Go Home” and “Today” are strong songs with great lyrics and a fine feel. Prince’s “Little Red Corvette” is done up quietly and (against all odds) works perfectly. Given the makeup of this record, it’s amazing how well the song fits with Zito’s stylistic mix. Former Prince buddy David Z produced the record with Tony Braunagel, and Zito is joined by a fine cast of musicians, including Hutch Hutchinson (bass), and longtime Tom Petty keyboardist Benmont Tench. They, along with Zito’s fine writing and to-the-point playing, help make this a stirring debut from a promising artist.

This article originally appeared in VG’s Sept. ’08 issue.  All copyrights are by the author and Vintage Guitar magazine.  Unauthorized replication or use is strictly prohibited.
Current Issue