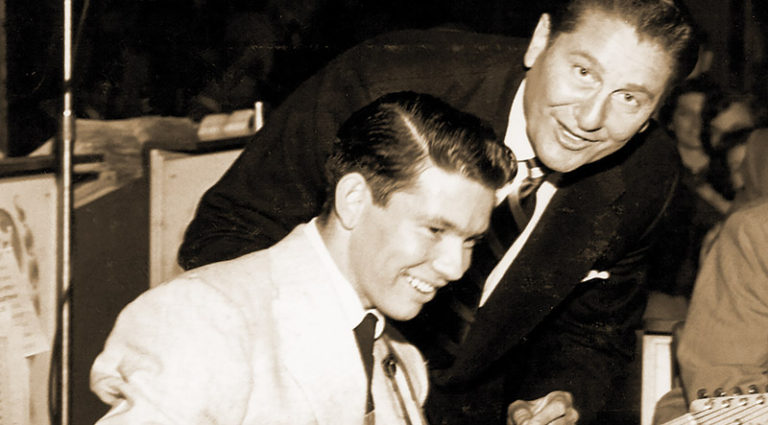 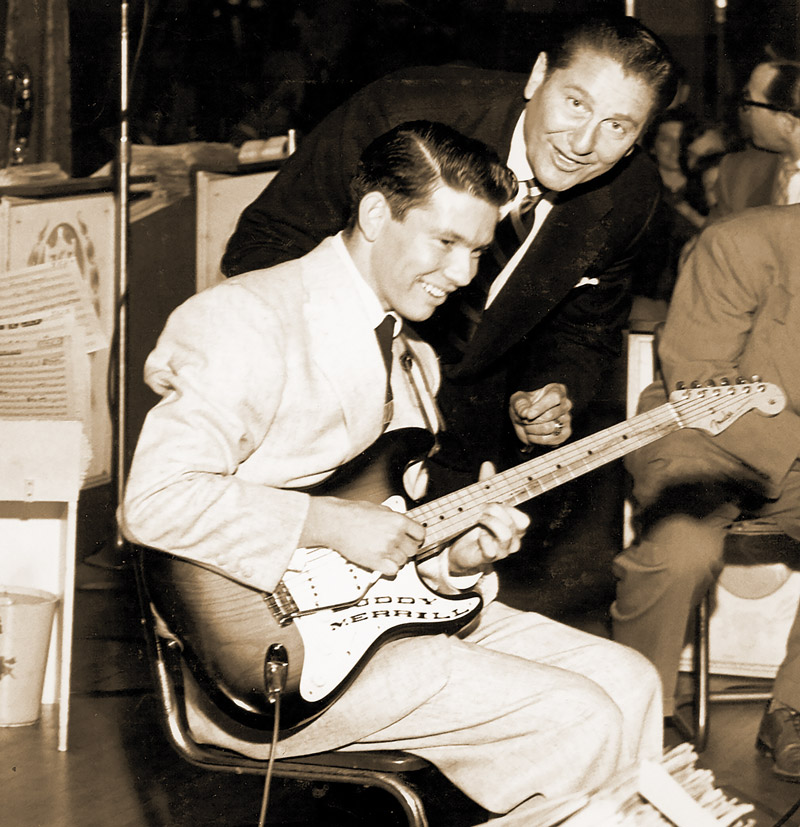 A native of Torrey, Utah, Leslie Merrill Behunin, Jr. was the son of country singer/guitarist Les Merrill. At six, he converted an acoustic guitar into a steel guitar and began teaching himself. By age 11, he’d upgraded to a single-neck Gibson lap steel after joining his dad’s band, the Fremont River Rangers, which played Utah venues and on Salt Lake City’s KDYL-TV. He later upgraded to a doubleneck.

The Welk connection began in ’54, when the accordion-playing bandleader, nationally renowned for his danceable “champagne music,” hosted a local TV show each Saturday night from the Santa Monica Ballroom.

Merrill’s mother entered a disc recording of his playing in Welk’s “All American” music contest. He won, sat in with Welk and the band and in 1955, then became their youngest member.

In a 2011 interview for NAMM’s Oral History Program, Merrill said he’d “stepped into a big bunch of luck” when ABC launched “The Lawrence Welk Show” nationally on July 2, 1955. Playing a Strat, he was prominent as a sideman and showcased on the pop hit “Mister Sandman.”

Welk’s show became a Saturday night institution for older audiences, yet Merrill’s prominence had an unexpected impact; he and James Burton (with Rick Nelson on “The Adventures of Ozzie and Harriet”) were the only young electric guitarists featured regularly on network TV.

“I couldn’t wait to see the show each week,” he said. “Buddy had a natural gift for playing guitar. He was a clean-sounding player.”

Though early seasons were broadcast in black and white, the young Duncan immediately noted the gear used by Merrill, who was a Fender endorser.

“I loved his blond Strat and the two-tone sunburst,” he added. “He played early anodized-guard Jazzmasters and some Strats with black pickguards.”

Duly impressed, Duncan, who played a Silvertone Jupiter guitar and amp, sold a rare coin to buy his first Strat in ’63.

When Merrill left for the Army in ’59, Welk filled the gap with Hollywood studio veteran Neil LeVang (VG, December ’09), who remained after Buddy’s 1961 return. Welk highlighted them as soloists and as a team; once, LeVang played a Bass VI as Merrill, picking a Jaguar, twanged away on a Duane Eddy-inspired “Deep in the Heart of Texas.”

As country’s popularity grew in the ’60s, Welk added more to the lineup. Merrill and LeVang would tackle “Panhandle Rag” or “New San Antonio Rose” instrumentally. On a later broadcast, Merrill, strumming an L-5, sang Little Jimmy Dickens’ “A-Sleepin’ at the Foot of the Bed” as LeVang added wah licks on an Epi Sheraton.

When his Fender endorsement ended in the ’60s, Merrill endorsed Emmons pedal steels and Micro-Frets guitars, and played their Huntington model, an instrument he later gifted to Deke Dickerson.

During his years with Welk and beyond, Merrill recorded numerous instrumental guitar and steel albums for Accent Records and other labels, many incorporating the multi-tracking he’d always loved. Today, collectors of “Space-Age Pop” instrumentals treasure some of this work.

Anxious to pursue solo projects, Merrill left Welk in ’74 and settled into composing and recording guitar instrumentals for use as background music. He briefly re-joined Welk for the bandleader’s final programs before he retired in ’82.

Welk’s show, which continues to thrive in syndication, has long been satirized for its hackneyed presentations and bland music. But it’s beyond dispute that Buddy Merrill left an enduring impact on American guitar, in ways Welk probably never envisioned.