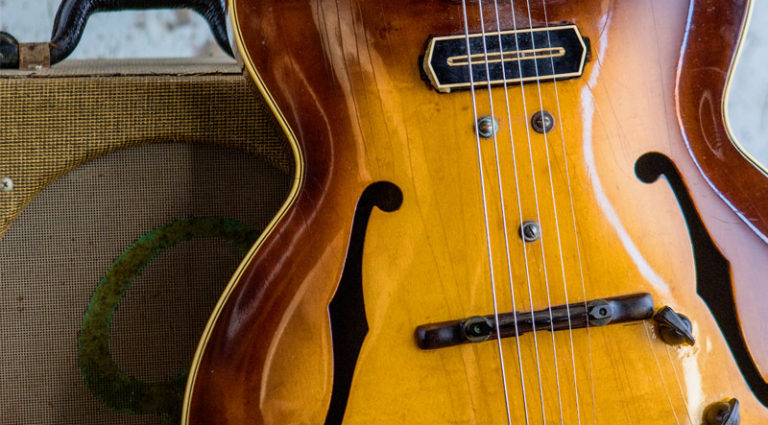 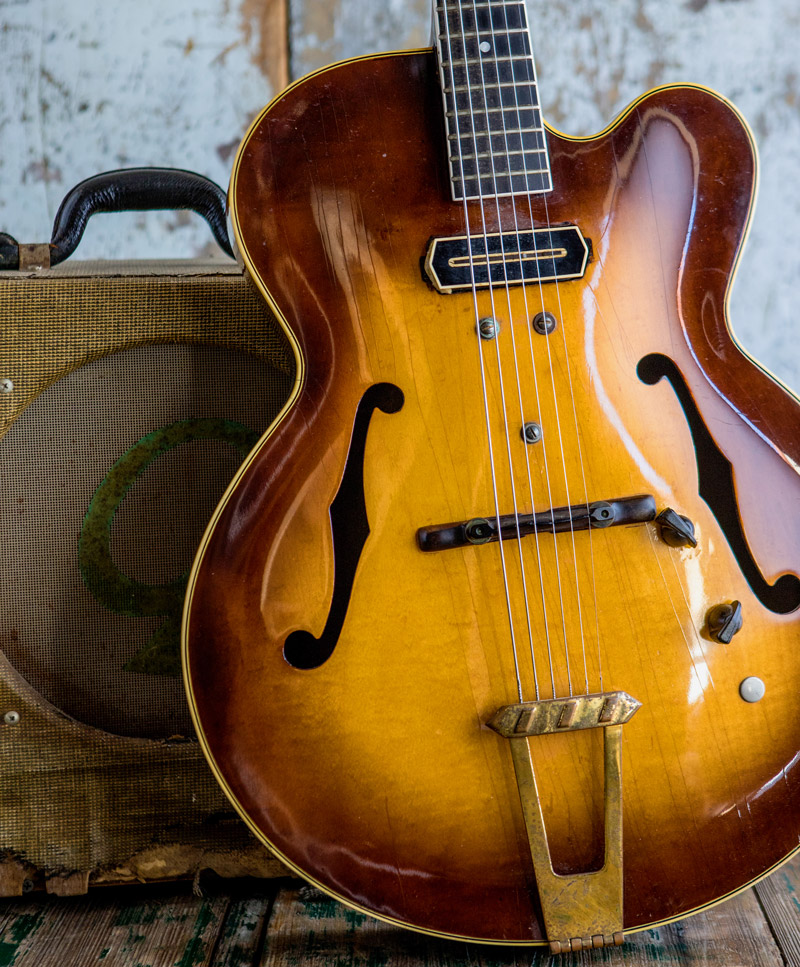 Bruce Forman acquired Barney Kessel’s beloved Gibson ES-350 in mid 2021. In prep for recording Reunion!, he made the guitar his exclusive daily player.

“All it needed was a little setup, and I put flatwounds on because that’s what Barney used,” Forman said. “I did, too, for years, but haven’t in a long while, so that took some getting used to.

“I saw that guitar come out of its case so many nights, and heard all that amazing stuff coming out of it,” he added. “I was on tour with him in New Zealand and Australia in 1988, and because my Ibanez was a 16″, the airline let me carry it on. But he had to check the Gibson, and when he opened the case at baggage claim after one flight, the headstock was broken off. He had to borrow guitars the rest of the tour. He had the 350 fixed and used it the rest of his career, but they didn’t do the greatest repair job. It’s not pretty, but it’s that guitar! Nobody can do what Barney did on it, but it has the vibe. His juju is in there!”

Kessel-family anecdotes and photos suggest Barney owned two ES-350s. Each started life with a single P-90, marking them as Premier models from ’46 or ’47, and both were likely acquired in the late ’40s/early ’50s. Each was also heavily modified.

Kessel’s star in the jazz world began rising as early as ’51, when he joined Norman Granz’s Jazz At The Philharmonic program. In that congregate, he met Brown and a young Canadian pianist named Oscar Peterson; Barney would spend much of ’51 and ’52 with Brown in The Oscar Peterson Trio, one of the most important ensembles in jazz. By the end of ’52, Herb Ellis had replaced Kessel.

Kessel is best known as one of the greatest jazz guitarists in history. But from the early ’50s on, he built and maintained a second career as one of the most successful and noted studio musicians; his dates number in the thousands – for Ella Fitzgerald, Charlie Parker, Billie Holiday (that’s him on “Body And Soul”), Julie London, and dozens of other jazz-leaning stars of era. In the ’60s and ’70s heyday of L.A.’s fabled Wrecking Crew, he played as many pop sessions as any guitarist on the scene, including dates for Sonny and Cher, The Righteous Brothers, Elvis Presley, and Lou Rawls. Brian Wilson wrote a touching letter to Barney, thankful for his contributions to The Beach Boys’ Pet Sounds.

Kessel played any number of guitars in his pop session work, from Telecasters to flat-tops (even mandolin and banjo). Steve Howe has told of reading about how Barney said, “You need eight guitars to be a studio musician,” and credits his own gravitation to the Gibson ES-175 to seeing Barney’s “big, hollow guitar” on album covers. But for Barney’s jazz work – his preferred focus – once he settled on the ES-350, he stayed with it for the remainder of his career.

Perhaps the best-known modification to Barney’s 350s is the swap of its P-90 for a Gibson ES-150 “Charlie Christian” pickup. In a video online, he describes the pickup in detail, declaring the magnet was made of an alloy that could not be reproduced. As a budding guitarist, Kessel, born and raised in Muskogee, was dazzled by the pioneering Christian, a fellow Oklahoman who was a star with Benny Goodman. The two jammed together for three days when Christian sought out the 16-year-old Barney after hearing about him.

In 1957, Maurice Summerfield, a British guitarist and admirer several years younger than Kessel, wrote to his hero, initiating a lifelong friendship that resulted in thousands of bits of correspondence and, at times, a business relationship. Summerfield’s working life would eventually include publishing, guitar design, concert promotion, and importing noted American and Japanese brands to the U.K. (Guild, Martin, D’Addario, etc.). He is also the author of the excellent biography, Barney Kessel: A Jazz Legend (sadly, it’s out of print).

“For 12 consecutive years, Barney came to my home city, Newcastle upon Tyne, to present his four-day seminar, ‘The Effective Guitarist,’” Summerfield said. “That gave us an opportunity to socialize and discuss many matters – not just music.

“In his seminars, Barney advised musicians not to copy their heroes, but to find their own voice. He confirmed that, as a teenager, he copied the sound of Charlie Christian, but then soon developed his own distinctive sound and style.”

Summerfield was also behind a guitar model that Kessel fans often wonder about, as there is very limited video of Barney actually playing it.

“Barney was impressed with the success of the Ibanez Joe Pass JP20 that I’d designed with Joe, so he agreed to have a prototype made to his basic requirements, and Ibanez produced a couple of samples. While his ES-350 was being re-fretted and cleaned in L.A., Barney played that first sample on a 1979 European tour. However, as before, he returned to his faithful ES-350.”

The short-lived Ibanez experiment was far from Kessel’s only foray into endorsement. In 1956, Kay introduced three “Kay-Kessel” archtop models – the Jazz Special, Artist, and Pro. Photos from pop sessions over the next few years show Barney holding these, though for movie dates where he was mostly playing rhythm in a big-band or orchestral setting, he almost always employed one of two ’30s Gibson L-5s originally owned by early studio legend George M. Smith (Barney studied arranging and composition, even in his busiest professional years, and believed in strict tonal parameters for that rhythm playing). He is also said to have used one of the L-5s on Barbra Streisand’s “On A Clear Day,” as well as on some of the Sonny and Cher dates, four Elvis Presley movies, and many dates for Phil Spector.

There were also the Gibson Barney Kessel models that debuted in 1960 – the BK-C (custom) and BK-R (regular). Both sported 3″-deep laminate bodies, double Florentine cutaways, two humbucking pickups, and Tune-O-Matic bridges. They were produced until ’72, and much has been written about Kessel’s dislike of them, likely owed to the fraught relationship he had with Gibson over time. Barney had been well-compensated by Kay for lending his name to their B.K. models, whereas he felt bristled about Gibson using his name to sell guitars and not paying him enough. Those who were close to Kessel are certain that dissatisfaction was behind his painting over the Gibson name and logo on the ES-350’s headstock.

“When I took the 350 to get it set up, the guitar hadn’t really been played since Barney had a stroke in 1992,” said Forman. “I had the grunge cleaned off the fingerboard, setup tweaked closer to what I’m used to, and so on. We thought about cleaning the headstock and removing the black overspray, but the repairman said it was some kind of spray paint, and he was afraid it would start coming off if he tried to clean it.

“I’m still amazed every time I sit down with this guitar,” he added. “All the incredible stuff that came out of it, from Barney’s hands. He challenged his own perceptions, and so do I. Barney told me once, ‘I like you because you play the way I play, but you don’t play like me.’ I think he meant that I wasn’t just trying to ape him, but we had similar sensibilities. What an honor.

“Barney wasn’t a tech guy. He was all about the music. He thought of himself as a musician who just happened to play the guitar, and this one got him what he wanted – made it possible for him to get out what he was hearing.

“The record is about honoring what these guys did – all three, of course, but especially Barney. Think about it: Barney really legitimized the guitar-bass-drums trio. Chico Hamilton had a group, and there were a few others, but as far as the guitar taking the place of a piano in a trio, Barney put that on the map. Jim Hall solidified the format as a backing for a horn player, like with Sonny Rollins. But with the Poll Winners, Barney was the guy who proved guitar could cover that role. My view is from a jazz angle, but almost no one was doing it before they made it viable; a few years later you got Buddy Holly. Ten years later, you got Hendrix. I’d argue there’s a connection.

“As for this guitar, I think about how close he must have been to it. The later repairs to the sides and headstock are really crude – they left it pretty rough after the break, and he played it like that, for years, constantly running over that rough spot. But I get it; it’s like a dance partner you’re really used to. If you change partners, you’re gonna dance differently. Barney knew exactly how he wanted to dance.”

Guitar modifications are common today, but in the 1940s and ’50s, few thought about seriously altering a nice guitar; except for the, “We got drunk one night and stuck all the peace signs on it” craze in the ’60s, major mods were scarce until Eddie Van Halen began gouging holes in parts-o-casters.

But in the early ’50s, Barney Kessel knew what he wanted his guitars to sound and feel like – and wasn’t shy about modifying his two ES-350s.

Each first received a pickup swap. In place of the original P-90, Kessel installed a Gibson ES-150 “Charlie Christian” pickup. Both also were given new fretboards; the one on Forman’s was replaced with a 20-fret ebony board with dot markers (stock was also 20 frets, but rosewood with parallelograms). On the other, Kessel had the neck extended, bumping into the pickup edge with a 22-fret board.

Interestingly, while tone may have been a consideration, Maurice Summerfield, Kessel’s friend and biographer/collaborator, said ebony was chosen mainly because Barney believed it would better repel sweat, thus cutting down on finger grunge and making strings last longer.

On the Forman guitar, Barney’s final tweak was moving the Volume and Tone controls closer to playing position (and plugging the original holes with an electronics cap), then replacing the stock knobs with “chicken head” radio knobs that allowed him to feel their setting without looking. Except for the holes from the P-90, the mods have the aesthetic of a Gibson factory build – seamless mating of fretboard, binding, and neck, along with clean installation of the pickup. It has even been suggested Kessel had it refinished several times, yet it has the appearance of stock.

So, who was responsible for this wizardry? All we have are educated guesses. Norm Harris, of Norman’s Rare Guitars, suggests there were only two people in those days who could have done the work so cleanly – Jack Willock and Milt Owen.

“Those two guys could do anything, and no one else back then was even close,” said Harris.

“Milt had worked for Gibson in Kalamazoo, so the Gibson look and feel was second nature to him. Willock was great, too, but if I had to bet money, I’d go with Milt. When Barney had his store (Barney Kessel’s Music World) in Hollywood, Milt was his staff repair guy. All the studio guys took their stuff to him. Take him an L-5, and he could downsize it and make it look like it was a factory one-off.”

Mercifully, no one will hazard a guess at the person behind the headstock or side/rim/jackplate repairs on the Forman 350.