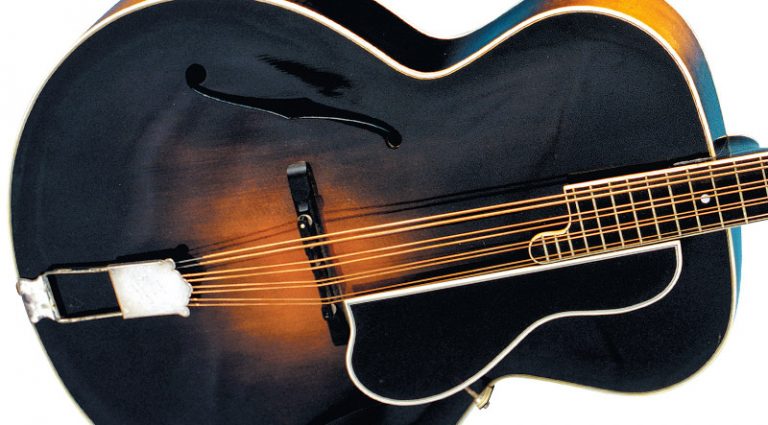 The violin-style f-holes of Gibson’s F-5 mandolin, L-5 guitar, and other Style 5 instruments, are the most famous and most significant elements of Lloyd Loar’s legacy as the designer of the Style 5 Master Model Series. Those models created a new sound and style and set a new design standard for archtop instruments that endures today. However, the instrument that underwent the most radical change to become the Style 5 was neither the mandolin nor the guitar. It was the mandocello.

Prior to Loar, the mandocello had been just what the name suggests; a mandolin tuned to the same pitch as a cello, with an appropriately large, mandolin-like body. Italian mandolin makers made “mandoloncellos” as early as the 1700s, and they made them with the same bent-top, ribbed “bowlback” bodies as they did their mandolins. Raffaele Calace, one of the most prominent Italian mandolin makers of the late 1800s was also the first prominent mandoloncellist. In addition to his contributions as a composer and performer, Calace’s instrument featured a significant improvement – an added pair of strings tuned to a high-E (think of it as an octave mandolin with a low C string).

In the U.S., the mandolin began its rise after the arrival of the group known as the Spanish Students in 1880. The concept of a family of related instruments playing together was a familiar one, not only from the different-sized bowed instrument of the violin family but also from banjo makers such as S.S. Stewart, who offered banjos in various sizes and tunings. However, the mandolin quartet, with instruments equivalent to the two violins, viola and cello of a string quartet, did not appear until as late as 1897 (in Italy as well as in the U.S.) In the U.S., now-obscure makers such as Howe-Orme, Waldo and Gutmann built mandocellos, but as late as 1900, the Washburn catalog (a brand name of the Lyon & Healy company, the largest maker of fretted instruments at the time) still did not mention mandolas or mandocellos.

Orville Gibson began revolutionizing mandolin construction in the 1890s with his concept of the carved, arched top, but he is not known to have made any mandolas or mandocellos. The Gibson company, however, which was formed in October, 1902, featured mandolas and mandocellos in its very first catalog, so the market obviously existed. With aggressive marketing, Gibson would quickly dominate that market.

As previous makers had done, Gibson made its mandocellos in the image of its mandolins. The first catalog featured two models – the K-1 and the fancier K-2 – both with the pear-shaped, oval-hole body of its A-style mandolins. Like Gibson’s carved-top mandolins, their carved-top mandocellos produced a louder, more robust sound than the Italian-style instruments with their bent tops and bowl-shaped backs. Gibson made at least one scroll-body oval-hole mandocello around 1906, but it wasn’t until 1911 that Gibson catalogued a mandocello with the body of its high-end F-style mandolins. Visually, the K-4 mandocello made quite an impression, not only with its size, but with its rich red mahogany-stain finish.

By this time, Gibson was the dominant force in the U.S. mandolin market. The company aggressively recruited teachers as sales agents so that beginning students started off with Gibson instruments. Gibson also published music for mandolin groups and instructionals for starting mandolin clubs and was actively involved in the American Guild of Banjoists, Mandolinists and Guitarists. Its catalogs featured treatises on instrument construction, along with photographs of artists who used Gibsons, including a concert mandolinist named Lloyd Loar.

Gibson’s position as the leading mandolin maker in America was undermined by World War I and the subsequent decline in popularity of the mandolin. Gibson made an attempt to “join the crowd” in 1918 by introducing a tenor banjo, which was the preferred fretted instrument in the new jazz music of the postwar years. However, Gibson founding partner and general manager Lewis Williams did not give up on the mandolin. He thought that an improved family of mandolin instruments would spark a revival and restore Gibson to its former glory. By the late 1910s, Lloyd Loar’s association with Gibson had grown from endorsee to leader of various groups called The Gibsonians, as well as composer and arranger of mandolin music for Gibson. He also had a strong interest in instrument design, and in 1920 he officially signed an employment contract with Gibson as “acoustic engineer” to develop the new mandolin line.

Loar’s Style 5 Master Models debuted in 1922. They featured violin-style f-holes and parallel “tone bar” top braces, among other improvements (including a longer scale on the mandolin). In general, the F-5 was still easily recognizable as a mandolin, while the H-5 and L-5 looked like a mandola and guitar, respectively. Not so with the K-5 mandocello. Unlike the F-5 and H-5, it did not carry on with the scroll body of the earlier Style 4 (oval hole) Gibsons. Instead, the K-5 used the same body style as the L-5 guitar. It also had the same price as the L-5: $275.

There were two major drawbacks to the guitar body of the Loar K-5 – and they were related more to the perception of the instrument than its performance. Although the K-5 mandocello and the L-5 guitar were specified in catalogs with maple back and sides, during the Loar period (1922-’24) the backs of all K-5s that we have seen (and of all L-5s until late 1924) were actually made of birch. While the sound of many birch-back L-5s is, in our experience, equal to that of later maple-back examples, the maple back would be preferred, if only for its curly grain.

The second drawback of the K-5 is its guitar body. While it is certainly well-suited for the mandocello’s range, the fact that it is not at first glance recognizable as a mandocello can be a disappointment to a player accustomed to the attention that a large, scroll-body instrument such as the K-4 mandocello typically draws. On closer inspection, the K-5 does have several features in addition to its eight strings that easily distinguish it from the L-5; eight tuners on the peghead, an asymmetrical fingerboard extension, and a narrower tailpiece.

K-5s are quite rare. Although one appears in a late-1922 photo, and the one featured here is dated 10/13/23, the model didn’t appear on a Gibson price list until January 1924, and Loar signed his last labels for Gibson at the end of that year. Darryl Wolfe’s F-5 Journal has registered only six K-5s, and we would estimate production during Loar’s tenure to be no more than 15 or 20. And that would probably be total production of the model. Although Gibson continued to list it through 1936, we have never seen a post-Loar K-5. Interestingly, Gibson offered two Kalamazoo mandocellos with 16″ f-hole guitar bodies in the late 1930s, but we have only seen one example of those. Considering the excellent quality of the original K-5s, it’s surprising that most modern makers seem to have tried every style of mandocello except the f-hole archtop guitar body. For example, Del Arte and Ovation offered their basic flat-top guitar bodies with mandocello necks; Weber’s mandocello is an A-style; the Monteleone played by Mike Marshall is based on a K-4 (scroll body, oval hole) as is the Capek production model; Gilchrist’s is unique with a scroll body and f-holes. But none of them is a K-5.

This article originally appeared in VG July 2007 issue. All copyrights are by the author and Vintage Guitar magazine. Unauthorized replication or use is strictly prohibited.