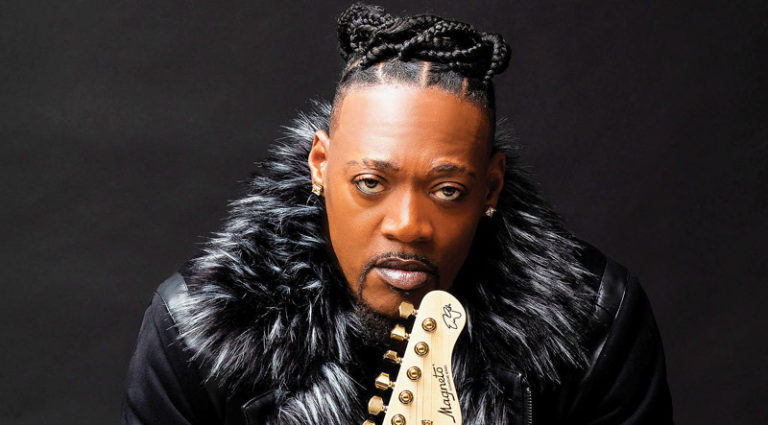 The latest from Eric Gales features the production talents of Joe Bonamassa, Josh Smith, and a face-melting guitar duel, but there’s more to Gales than mesmerizing guitar; his artistry runs deep, tempered by hardship, wisdom, redemption, and love. Bonamassa calls Gales “The best blues-rock guitarist in the world today,” and on Crown, he proves it.

How did you end up working with Joe Bonamassa?
We’ve been buddies for a while. Josh Smith partnered with Joe on producing stuff, so that’s how that came together. Joe and I have known each other for almost 30 years; when we first met, he opened for me. He was in Bloodline, and I was touring with the Eric Gales Band. Not too long later, his career skyrocketed. I did my thing for a couple of years and veered into some pretty bad things. Luckily, thank God, I survived. We came back around and rekindled in a very big way.

Your past albums drew on bad experiences, but Crown shows there’s love in your life.

Everything we talk about on the album is very near and dear to my heart. It speaks to things that have been happening for a long time. We had the opportunity to make something great, and I’m glad it came together like it did. Right before we started, the George Floyd murder happened. A lot of that strayed into the record. I wanted to write about stuff that made a statement and meant something, to have a conversation with the listener on every song. I just so happened to have met a great woman that made me realize there was another way. From there, it’s been off to the races.

You also deal with the haters.

They say, “If ain’t nobody hatin’ on you, then you ain’t doin’ nothin’.” But, hate don’t deserve the time of day. Those that do are probably in their mom’s basement playin’ guitar with Youtube videos. What do they do to change the world night after night by performing their own material, as opposed to being in their mom’s basement playin’ to cover songs? That message was a general statement for those out there who attempt to come my way.

Somebody told me to shut up and play at one point, which was comparable to Laura Ingraham telling Lebron James to shut up and dribble. You’re going to get a reaction from me and everyone who follows me, because everyone knows how open and compassionate me and my wife are about things that need to be talked about. It will be addressed, and in my mind, I just made you famous (laughs).

Did Bonamassa try to influence your sound on the album?
Eighty-five to 90 percent of the solos were cut live. That was kind of new to me. Everything else was nothing I hadn’t seen before. We just did it in a slightly different way. When you’ve done 18 records, you’ve been through all kinds of processes, waves, and procedures; it’s what you do.

It must feel good to know your dueling videos with Bonamassa and Gary Clark, Jr. have gone viral.

It’s really awesome getting a proper due after everything I put myself through. I should have been dead a long time ago, and to be here and see myself rise up from the ashes like a phoenix is awesome. When I look back at my life and my story, what a great redemption.

What’s your main rig?
I use Magneto Guitars. They have a great feel, and you can play it all day, and it doesn’t feel like you’ve been playing it all day. I have my DV Mark Raw Dawg amp. I have a pedalboard with a Crybaby, Whammy, a Tech 21 delay, my MXR Eric Gales Raw Dawg Overdrive, and an Eric Gales Brute Drive. Even though Joe had a lot of stuff available, he said, “Dude, I’m not here to alter your tone. You got a badass tone. Let’s go with what you’ve got.” I’m not the kind of artist Joe has to mold, someone who didn’t have familiarity with their own sound. We both believe in great tone.

The opening track, “Death Of Me,” is so out-of-the-box.
We were going for a rock song with symphonic classical overtones. I think it came out really well. In the middle, I wanted to go Baroque-ish. I have a liking for classical music, and it was a great way to incorporate that into the song.

History of a Mystery