When a former Beatle name-checks you before a guitar solo on your very first recording with the band, you must be special. And Jimmy McCulloch was, as evidenced by Paul McCartney’s exuberant “Take me down, Jimmy!” on Wings’ 1974 single “Junior’s Farm.” The Scottish guitarist, who was 26 when he died in 1979, is the subject of this solid biography by Paul Salley. 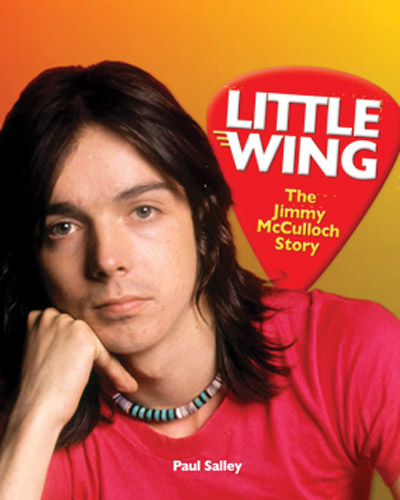 McCulloch earned accolades as a teenager, playing with Thunderclap Newman on the 1969 hit “Something in the Air

.” He was a member of Paul McCartney & Wings from 1974 until ’77, playing on several hit albums and live smash Wings Over America. For trivia, McCulloch was invited to join David Bowie’s group the same day he got the Wings offer. He once left to join the James Gang, desiring a real touring band, but returned after Linda McCartney offered him a proper weekly wage. Post-Wings, Jimmy played with Steve Marriott in a reformed Small Faces.

McCulloch is described as a professional when sober, but possessing demons of drink and drugs; his death was listed as an accidental overdose. Fortunately, there’s ample info here about Jimmy’s gear, including his famed red Gibson SG. Best of all, his story is untold no longer.