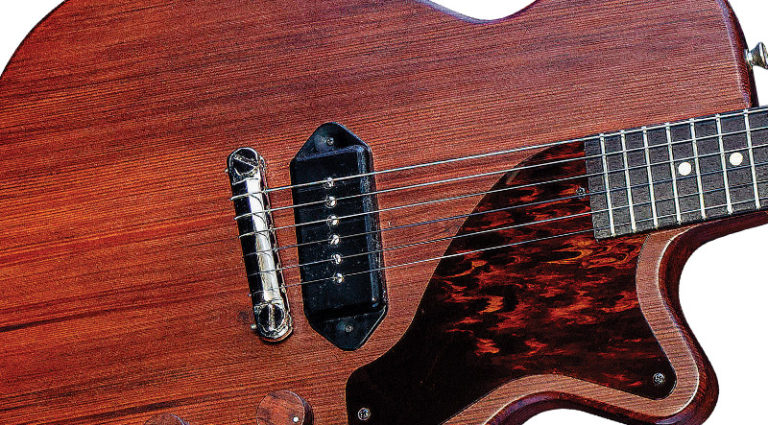 Luthier Barry Grzebik was a Jersey boy who moved to NorCal in his teens. When he began building guitars, he was inspired by the sonic possibilities of redwood. Those possibilities perhaps seem fully realized in his Grez Mendocino Junior.

Grez’s flagship Mendocino is a crazy-cool chambered semi-hollow packing a duet of Lollar goldfoils, and the line recently expanded with a baritone version plus this Junior.

Hoist the Mendocino Junior and you’ll think something’s wrong, or at least missing. This little fellow weighs just 5.5 pounds. The body is to thank – it’s fashioned from a single piece of reclaimed first-growth redwood.

As Grzebik explains, vintage Les Paul Juniors sound $10,000 worth of wonderful due largely to their 70-year-old wood. Grez’s redwood is roughly a century old and well-seasoned. Plus, it’s drop-dead gorgeous, casting the Mendocino Junior as a supermodel among same-olds.

The body is mated to a one-piece Honduran mahogany neck with Macassar ebony fretboard that’s 24.75″ long with 22 nickel-silver-gold jumbo frets. There are just two glue joints in the whole body, adding to resonance. Together, the body-neck balance is superb, which can’t be said for all Les Pauls.

Pickups are Wolfetone MeanerP90s, which live up to their name; they are indeed meaner, raunchier, dirtier than many. These Alnico II pickups measure around 9k – hotter than most vintage units. Controlling that bark are Emerson 500k Volume and 250k Tone pots.

The Grez shifts effortlessly from sweet and smooth to malevolent and growling. Many vintage Juniors rock with authority but lack that sweeter disposition. And the Grez is wonderfully touch-sensitive… play it soft, and it sings; dig in, and it bites. Simply, wow!